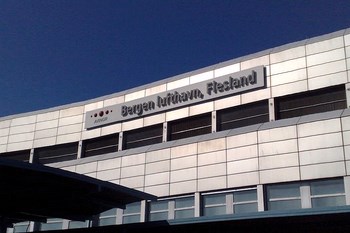 Bergen Airport Flesland (BGO) is located 20 km south of Bergen, and is the second largest airport.It was built in 1955, and currently serves about 5 million passengers annually. A British travel magazine named for a couple of years ago Bergen Airport to “Europe’s Best Airport”.

The current terminal was opened in 1988, but it has already planned a significant expansion in the coming years. The old terminal is now the helicopter terminal for oil operations in the North Sea.

From Bergen Airport Flesland is that, in addition to an extensive domestic, also regular flights to 51 destinations across Europe – operated by around 15 different airlines.

The communications between the airport and the city center are good. One can choose from the airport bus, regular bus or taxi. If you want to rent a car in Los Angeles, have a number of international car rental agencies at the airport offices – including Avis, Budget, Europcar, Hertz and Sixt.

Also the public facilities are well developed at Bergen Airport – with several different stores and kiosks, as well as a number of restaurants / cafes and bars. It is also excellent conference facilities, free wireless internet and several ATMs in the terminal buildings.

Adjacent to the terminal there is also a large, modern hotel – Clarion Hotel Bergen Airport.