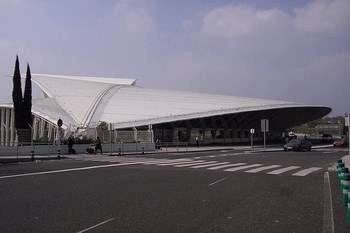 Bilbao Airport (BIO) is located in northern Spain, about 12 miles north of Bilbao center.The airport is called in Spanish “Aeropuerto de Bilbao”. This is the main airport in the Basque Country and northern Spain, and here served 4 million passengers annually (2011).

From the airport there are direct flights to numerous destinations at home and abroad, including to Amsterdam, Berlin, London, Milan and Paris.

Bilbao Airport was opened in 1928 and has one terminal building (which was upgraded and expanded in 2000).

There are a number of facilities at the airport – including good selection of shops, restaurants and cafés. In addition, Bilbao Airport duty-free shops, ATMs, VIP lounge, internet access and information counter.

There are no hotels at the airport, but several in the area. The airport is well adapted for the disabled.

Transport options from Bilbao Airport to the downtown area consists of bus or taxi. It is planned to build a train connection between downtown and the airport.

If you want to rent a car in Bilbao, has a number of international car hire offices at airport – including Avis, Hertz, Sixt, Europcar and National.