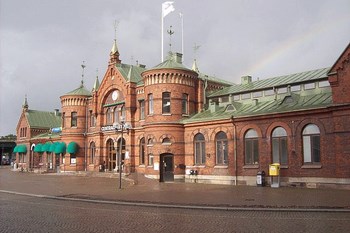 Boras is in south Sweden – the landscape Västergötland – and part of the county Västra Götaland County.

The city is the administrative center of Borås Municipality. The Boras has about 66,000 inhabitants (2011), while the whole municipality has a population of over 100,000.

Boras is by the river Viskan – approx. 66 km east of Gothenburg.Boras was founded in 1622 and is today Scandinavia Mail Order Center – where many well-known mail-order firms have their warehouses and factory outlets – including Ellos, H & M Rowells, tail and Cellbes.

Boras is known for textile industry, and by the historical museum “Texilmuseet” visitors can learn more about this.

Borås Municipality has over 120 churches, and in the center is Caroli Church from 1669, is the city’s oldest.

There are a number of tourist attractions in Borås suitable for families with children – including Borås Zoo – with African, Asian and European species, Adventure park “Upzone” – with climbing lanes and bobbycar, “Navet Science Centre” – a natural science museum with interactive exhibits and water park “Stadspark bathroom” – with a wave pool and water slides. In summer it is popular to take a trip to “Alidebergsbadet” – which features a large outdoor swimming pool.

Other attractions include Borås Art Museum, open air museum – with 15 historic buildings (including the well-preserved houses from the 1700s), the old water tower from 1900 and the city’s major shopping mall “Bright Land” – with over 100 shops and restaurants.

The city also arranges a series of concerts, exhibitions, conferences and events throughout the year.

The nearest airport is Airport Gothenburg – Landvetter, which is located 44 km west of Boras.