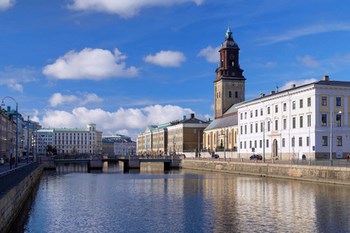 Gothenburg is Sweden’s second largest city, located on the southwest coast – where the Göta Älv flows into the Kattegat.

The city is situated in Västra Götaland County, and is part of the landscape Bohuslän / Västergötland.

Gothenburg is a significant commercial and cultural center with a cosmopolitan atmosphere and an important railway junction. In addition, Gothenburg is a college town, and also has the largest harbor. The harbor for the ferry to such Frederikshavn Denmark.

Gothenburg is known for its beautiful coastline with numerous small islets. The city has otherwise a number of museums and opera, concert hall, theaters and art galleries. In Gothenburg are also good shopping and a diverse nightlife.

Some of the most popular tourist attractions include Gustaf Adolf Torg in the city – with a monument to the city’s founder, amusement park “Liseberg”, the popular science museum “Universeum” – with aquarium and troparium, Slottsskogen – with mini-zoo and Gothenburg Art Museum – an exhibition of Nordic art. Here you can also see the works of Rembrandt, Picasso and Monet.

In Gothenburg is also the historic district Haga, which is a popular destination for tourists. Here are renovated houses and buildings from the 1800s and pleasant cobbled streets. Along Haga Nygata are cafes, restaurants, specialty shops and antique stores close together.

In Haga is also fortified “Skansen Kronan” from 1687 – with its octagonal tower.

The city is otherwise a maritime museum, a natural history museum and a design museum. It is popular to take a sightseeing tourist boat “Paddan” which runs through the city’s canals.