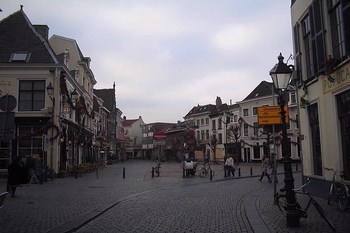 Breda in the south of the Netherlands  – Ca. 40 km southeast of Rotterdam, and part of the region Noord-Brabant.Breda has approximately 175,000 inhabitants (2011), and the Netherlands 9 largest city.

Breda became a city in 1253, and was until the 1800s a significant fortress. Today Breda an important industrial city and is among others known to be a busy commercial center.

A major tourist attraction in Breda is the beautiful historical city with its ancient buildings. At the large square “Grote Markt” – which is the core – is the Gothic cathedral “Grote Kerk” from the 1400s, with its 97 meter high tower. This is also the old town hall (with its façade of 1768).

Slightly southeast of the old town is St. Anthony’s Cathedral from 1837 and is located in the city park Valkenberg Breda Castle from 1828.