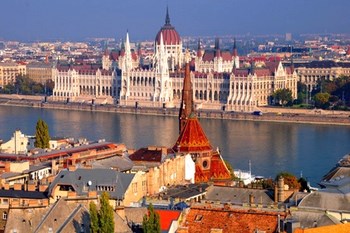 Budapest is located on both sides of the river Danube and is an important port city. The district Buda on the right bank, while the Pest district is on the left. The two river sites are associated with 8 bridges – where the Chain Bridge from 1849 is the most famous.

Budapest is considered to be one of Europe’s most beautiful cities, and has a number of tourist attractions. On the Buda side, the castle from 1715, which is a UNESCO World Heritage Site. Inside the castle you can visit the National Museum. Also Matthias Church – originally from 1015 – is a popular attraction.

On the Pest side is the impressive Parliament from 1904 – which has a 265 meter long facade. Also, the National Theatre, the Opera House and St. Stephen’s Church from 1902 are popular tourist attractions here.