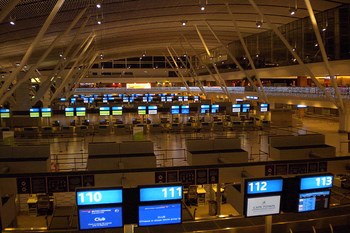 Cape Town International Airport (CPT), 25 km east of Cape Town city center – and South Africa second largest airport.Over six million passengers served here each year – and the figure is expected to rise sharply in the years ahead. The airport is also known by its former name, “DF Malan Airport”. The main base for South African Airways are located here.

The public facilities at Cape Town International Airport is very good. Shopping area “Airport Shopping Safari” offers a variety of shops. Otherwise it is a great restaurant and several smaller cafe in the terminal. The closest hotel is Road Lodge Hotel, located opposite the airport – in walking distance of the terminal.

To get from the airport into the center of Cape Town, one can make use of minibuses that run directly to several major hotels – or you can choose taxi.

If you want to rent a car in Cape Town, there are several international rental agencies to choose from at the airport – including Avis, Budget, Europcar, Hertz, National Alamo and Dollar Thrifty.