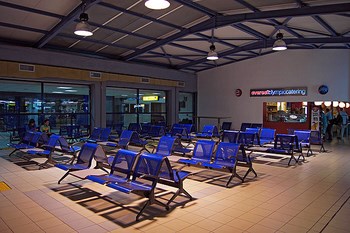 Corfu International Airport – Ioannis Kapodistrias (CFU) – is a small international airport located on the east coast of the Greek island of Corfu   in the Ionian Sea. The airport is also called often Corfu Airport – as it is 3 km south of the center of the island’s capital, Corfu.

Corfu Airport has great charter traffic in the summer season and throughout the year there are direct flights from here to such Athens, Hamburg, London, Berlin and Frankfurt.

The airport was built in 1962 and opened for international flights in 1965. It’s a terminal building at Corfu Airport.

Facilities at the airport are relatively limited, but you can find café and snack bar in the terminal building. In addition, there are a few shops (including Tax-free), information desk, bank, ATMs and a post office. There are no hotels at the airport.

Transport from Corfu airport and into the city center consists of taxi or bus. In addition, there are seven car rental companies in the terminal – including Avis, Hertz, Europcar, Sixt and Budget – if you want to rent a car in Corfu.