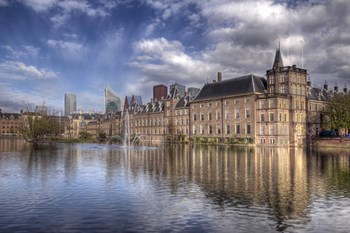 The city of The Hague is located southwest of the Netherlands the North Sea and belongs to the province of Zuid-Holland.The city has about 500,000 inhabitants (2011), and is thus Nederlands 3 largest city (after Amsterdam and Rotterdam).

Hague is an important commercial and financial city and a major international convention and conference center.

The city is famous for housing the International Court of Justice (World Court), and its government and Parliament. In addition, The Hague city of residence of the royal family.

Hague has several famous buildings and works of art, and is considered to be one of Europe’s most beautiful cities. Some of the most popular tourist attractions include church “Grote Kerk” from the 1500s in the gothic style castle Binnenhof, City Hall from 1565 and the Peace Palace in 1913.

In addition to the historic architecture, the city has several theaters, museums, botanical and zoological gardens.

In the Art Museum “Mauritshuis” visitors can see exhibits of works by Rembrandt, and sculpture museum “Belden aan Zee” also recommended a visit.

There are good swimming summer in The Hague, with sandy beaches Langstane coast.

The nearest airport is Rotterdam Airport, located 16 km south of The Hague.