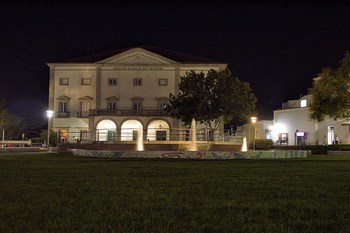 Evora is located in central Spain, ca. 120 km southeast of Lisbon – And is a city with about 45,000 inhabitants (2008).Tourism is an important industry for Evora, who is also a regional trading center.

Evora had an important military position in Roman times, and was therefore given first name Liberalitas Julia (named after Julius Caesar). The town developed later – under the Moors – a bustling commercial center.

Evora is today considered one of the most beautiful towns in Portugal – and the old town is full of UNESCO. There are several well-preserved buildings from both the Roman and the Arab era – including Aqueduct “Água de Prata Aqueduct.”

Among the main sights otherwise we Diana Temple in around 200 and the cathedral Sé de Evora from the 1100s (which in about 1400 was converted from Romanesque to Gothic style). It is Portugal’s largest church. In Evora you can also visit one of the most beautiful churches – Igreja de São Francisco from 1510. The chapel in this church – Capela dos Ossos – is decorated with the bones of ca. 5000 skeletons.

Other popular attractions in the city are Palácio dos Duques de Cadaval, which is an impressive building from the 1600s – and the university from 1559.

The nearest airport is Badajoz Airport, located 120 km northeast of the city. However, it is not that much further to the international airport in the capital Lisbon, located 132 km west of Evora.