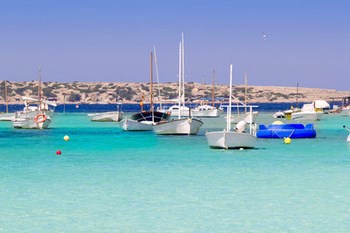 Formentera is a Spanish island in the Mediterranean Sea, located 3.6 km south of Ibiza.Formentera is the smallest and southernmost of Islas Pitiusa Archipelago, and is part of the region Balearic Islands.

The island has about 10,000 inhabitants (2011), but during the tourist season from June to August the population is increasing significantly. Highest point on Formentera La Mola, which measures 192 m

Main industry on the island is tourism, and the administrative center of San Francisco Javier. The cities’ es Pujols “and” es Caló o la Savina “are famous tourist places.

Formentera is famous for its beautiful white sand beaches – where many of them are untouched. The island is also known for having a large number of nudist beaches. In addition, Formentera lure tourists with pleasant climate and crystal clear water and plenty of opportunities for water sports – especially diving, sailing and windsurfing.

Formentera is a significant tourist noise quieter than Ibiza. The main attractions on the island is primarily sunbathing, swimming, beach and walks in beautiful surroundings. In addition, it is popular to rent a bike here.

There is no airport on Formentera and the island is only accessible by ferry from Ibiza or from the Spanish mainland. The nearest airport is Ibiza Airport, located 9 km southwest of the capital Eivissa Ibiza.

The ferry from Ibiza (which goes from Eivissa) spends 30 minutes, and arrive at the small port “La Savina” on Formentera.