Compare prices and find cheap car hire in Ibiza from well-known and local car hire companies. Insurances and unlimited mileage are included. Save up to 70% on car rental in Ibiza through us. 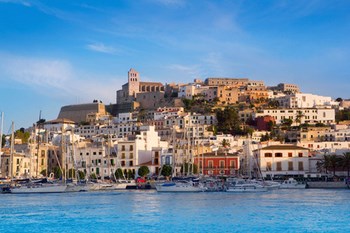 Ibiza is a Spanish tourist island located in the Mediterranean Sea – about 80 km southwest of Mallorca – and belongs to the province of balearic islands. The island has about 132,000 inhabitants (2011), but during the summer season the population rises considerably. Tourism is the island’s main source of income.

The highest point on the island is La Atalya, which measures 424 meters above sea level. The north coast consists mostly of steep cliffs, while the south coast has mostly long sandy beaches. The climate in Ibiza is hot and dry.

Ibiza is a popular holiday destination and has great charter traffic. Sunbathing, swimming, and beaches are the island’s main attraction, but Ibiza is also known for being a “party island” – with nightclubs bars and discos open until dawn.

The capital of the island is simply called Ibiza Town (Eivissa), and has approximately 50,000 inhabitants. From the port here there are ferry to, among others, Barcelona, Mallorca and Formentera. In the capital is Ibiza Cathedral, which is from the 15th century. Other important cities on the island are San Antonio Abad, Santa Eulalia del Rio and San José.

Sunbathing, swimming, and beaches are the island’s main attraction.

Even if you go to Ibiza just to sunbathe and swim, it is definitely worth renting a car on the island. Firstly, you get much faster and easier to and from the airport. It is also easier to see some of the many and beautiful small fishing villages there, as well as that you can visit the most beautiful beaches. Here are some of the rides in ibiza.

Distances and driving time in Ibiza

The distance to the various beaches and sights is not appropriate to bring when it comes to Ibiza. At its longest, the island is about 40 kilometers, and at its widest about 20 kilometers. Therefore, you are unlikely to spend much time in the car, almost wherever you are going. 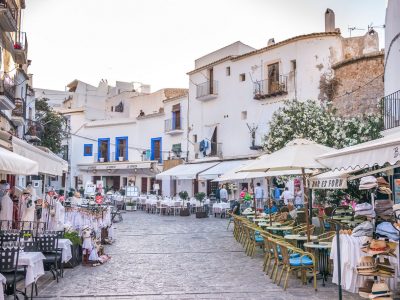 Enjoy life on one of the nice beer gardens.

The capital of Ibiza is called the same as the island, and in Catalan Eivissa (Ibiza Town is used internationally). If you don’t live here, stop by. In Eivissa you will find not only some of the most famous nightclubs and cafes, but also much other exciting to deal with. Take a trip to Dalt Vila, the old town that stretches up on top of the small hill that protects the city center. There you will find the Castle of Castell d’Eivissa, an old cathedral, pleasant eateries,and many galleries, museums and shops. Dalt Vila is a lovely neighbourhood to stay in. Here you can sit on a pleasant beer garden and enjoy the view out to the sea and the sunset, after looking at the shops and sights. 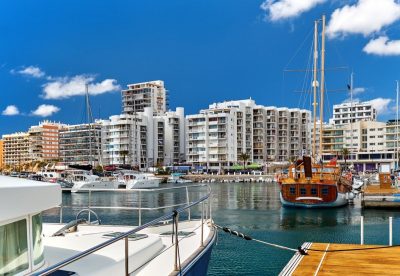 The best party venue in Ibiza, but there’s plenty else to do here too!

Located on Ibiza’s north side, Sant Antoni de Portmany is perhaps best known as Ibiza’s best party venue– especially in the 1980s and 1990s. Although this is still an attractive city for the party lions, there is also much else to experience here. The town has the second largest population on the island, after Ibiza Town (Eivissa). The beach S’Arenal de San Antonio, located on the south side of the city center, is among the best to sunbathe and bathe on. There are many boat trips from here, you can rent, for example, jet skis, surfboardsand kayaks,you can book fishing trips, take part in cave walks,and much more. You will also find many good restaurants in the city, good shopping, and of course many of the best nightlife options. 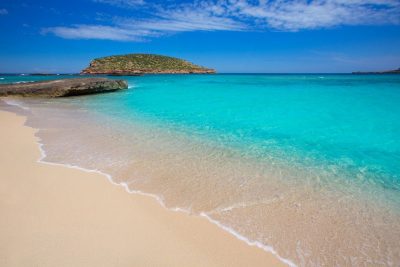 Many people think this is the most beautiful beach in Ibiza.

Not too far from Sant Antoni de Portmany lies what many believe to be the most beautiful beach in Ibiza, Cala Comte (also called Platges de Comte). There is easy to get with car rental, and it is almost always free in the associated parking spaces. There are a couple of islands just outside, which makes it shallow here, and thus almost always nice bathing temperature in the water. This area is also considered one of the best to snorkel in, because the rock formations provide shelter for many beautiful fish species. Just behind the beach there are several pleasant eateries, with panoramic views of the sea. Catching the sunset at Cala Comte is a must when you’re in Ibiza.

Puerto de San Miguel – The Hideout of the Pirates

The old fishing village of Puerto de San Miguel is (like everyone else) today one of the island’s many seaside resorts. Besides what comes with the great beach, bathing, water activities and such, you will find several good restaurants here. Seafood is, of course, the main focus, and many of the island’s inhabitants go to Puerto de San Miguel because here it tastes like it best. For example, try bullit de peix if you find it on the menu. This is Ibiza’s “national dish”, and a kind of stew based on different types of fish and shellfish. If you are visiting San Miguel, consider exploring the nearby Cova de Ca’n Marçà Cave. The cave system was once the hideout of feared pirates who had Ibiza as the base for their ravages in this waters. 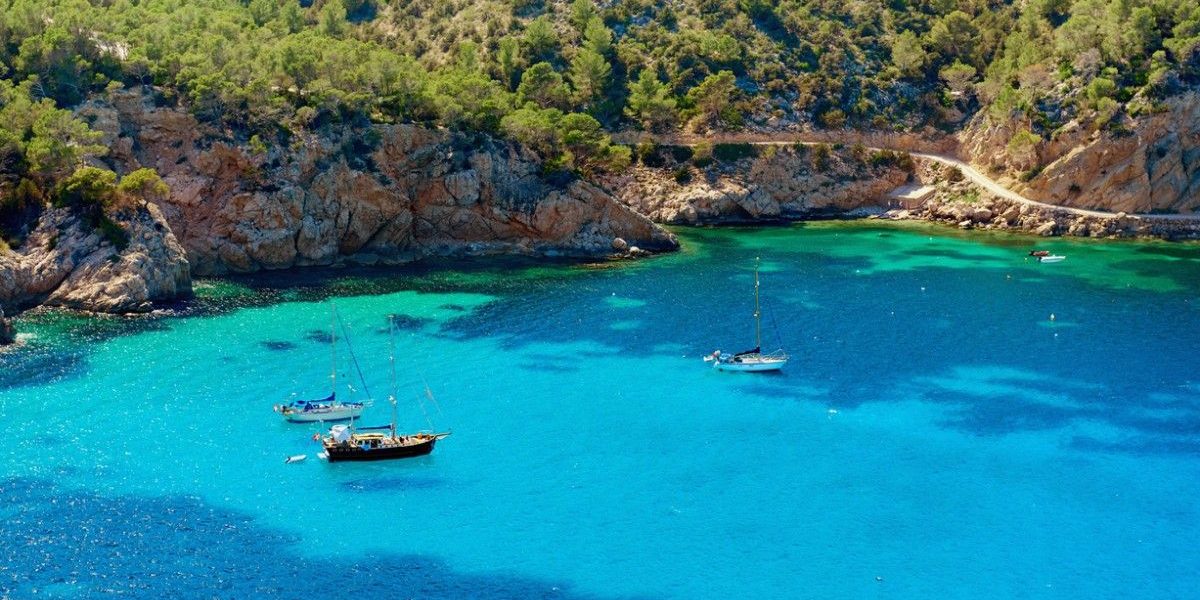 The highest point of Ibiza can be found at the top of mount Sa Talaiassa (the name means watchtower in Catalan). The peak is 475 meters above sea level,and it is possible to drive a car all the way. Most people, however, choose to leave the rental car in the village of Sant Josep de Sa Talaia, and then take the marked path from there. The stretch is no more than about 2.5 kilometres, and although it goes uphill, most people will make the trip without any problems. At the top you get a view out all over Ibiza, you look over to the neighbouring island of Formentera, and you can catch a lovely sunset or sunrise if you arrive at the top at the right time. 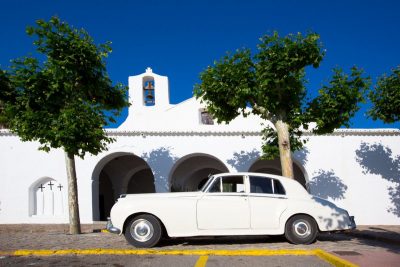 In marked parking spaces, you pay at parking machines, where you enter the registration number of the car.

In the streets of Ibiza Town it is allowed to park if it is marked in blue. Where there are yellow marks, and yellow combined with blue, parking is not allowed, unless there is a sign with allow time. You pay at parking machines,where you enter the registration number of the car (no note in the window). Note that there are different prices for summer half-year (most expensive) and for winter half years (cheapest).

The roads in Ibiza are generally good, and motorists drive mostly nicely. There are some stretches where the roads are winding and steep. Here you should drive slowly, and be aware that cars can get around every turn. Also avoid driving with a rental car on the cart roads that go to some remote beaches. As a rule, the insurance does not apply when driving, and damage you the car can be high.

Ibiza Airport (Aeroport d’Eivissa in Spanish) serves both the island of the same name, and the neighboring island of Formentera. Here you usually get by either charter flights, or by direct scheduled flights from most European cities. Despite the fact that the island is the popular destination, and there are several million passengers a year, the airport is small and clear. There’s only one terminal here.

As of today there are 8 companies offering car hire at the airport in Ibiza. These are Hertz, Avis, Europcar, Enterprise, Budget, Sixt, Goldcar and InterRent. All have counters both in the concourse and in the arrivals hall. The rental cars are parked in the nearby area and you will not need a shuttle service. 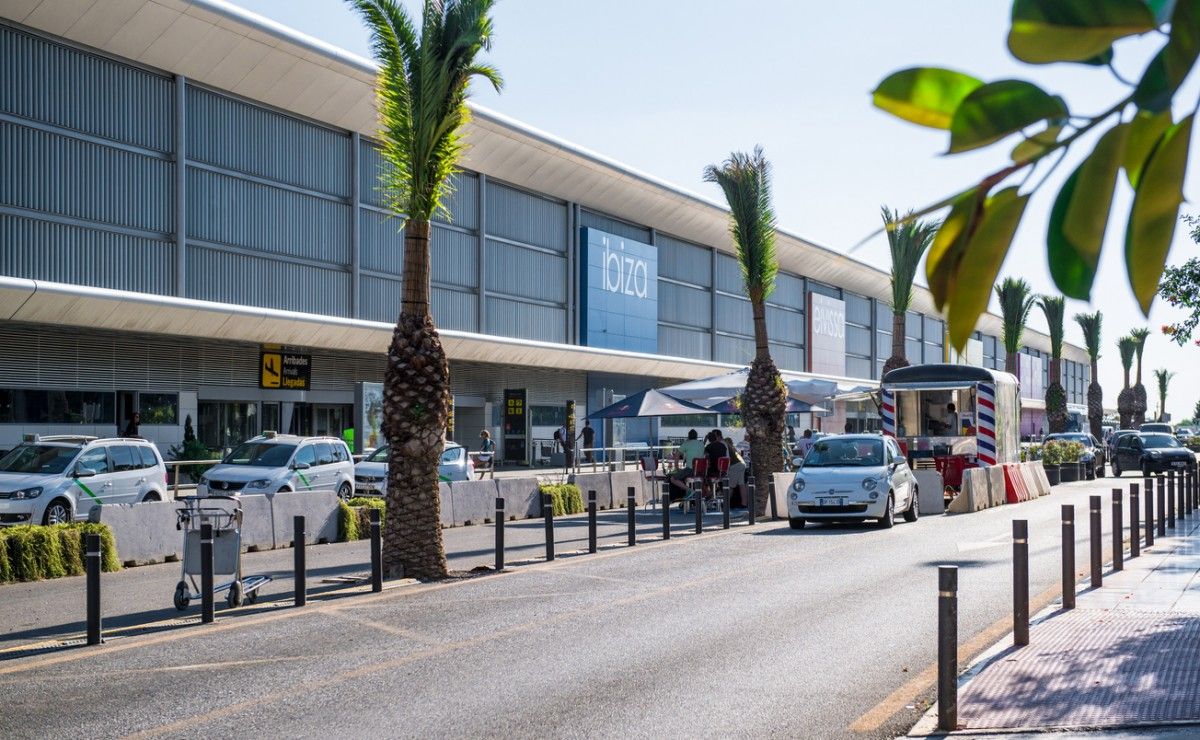