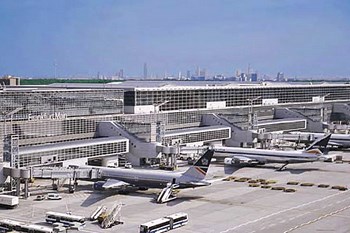 Frankfurt Airport serves 56.4 million passengers a year and has two terminal buildings. There are shuttle buses and the Skytrain between terminals.

156 airlines have direct flights from Frankfurt Airport to most major cities in the world.

Frankfurt Airport was opened in 1936 and is today a modern airport with a number of public facilities. There is an extensive range of shops, cafés and restaurants, and convenience stores, supermarket, conference rooms, banks, ATMs, currency exchange, post office, playroom for children, pharmacy, first aid station and internet access.

Sheraton Hotel is located in the airport area, and there are also several hotels in the immediate area. Many of the nearby hotels offer shuttle service to / from the airport.

To get from the airport to Frankfurt city center, one can take a train, bus or taxi.

If you want to rent a car in Frankfurt, has a number of reputable car hire offices at airport – including Avis, Alamo, Budget, Europcar, Hertz, National and Sixt.