Compare prices and find cheap car hire in Frankfurt from well-known and local car hire companies. Insurances and unlimited mileage are included. Save up to 70% on car rental in Frankfurt through us. 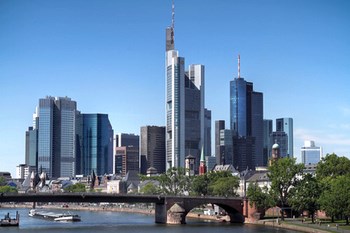 Frankfurt am Main is located in southwest Germany – in the state of Hesse – and has its city centre on both sides of the River Main. Its population is just over 650,000 (2010), but the entire metropolitan region (which also includes the neighbouring towns of Wiesbaden, Darmstadt and Mainz) is frankfurt city centre in a metropolitan area (Rhein-Main), which has a total population of over 5 million.

Frankfurt is otherwise an important financial centre – both for Germany and for the EU. With its large river port and road infrastructure (road and rail), the city is also a major communication hub. In addition, Frankfurt is considered by many to be the German “capital of literature”. Also as an industrial city, Frankfurt is important. Here you will find everything from car factories to print shops.

Frankfurt’s history dates back to the first century. Kr., when the Romans built a caste on the banks of the Main – and in the late 8th century Charles held the Great National Assembly in “Franconofurd”.

Parts of modern Frankfurt are dominated by huge convention and exhibition halls, where different annual events take place. Most famous is probably the international book fair, which brings together publishers and authors from all over the world. Otherwise, the city is home to one of Germany’s largest universities – named after the poet Johann Wolfgang von Goethe.

Frankfurt has a rich cultural life with museums (including the Städel Art Museum, the Goethe Museum and the Natural History Museum), libraries and theatres, zoological and botanical gardens.

Frankfurt was one of the German cities most destroyed during world war two. World war ii. Large parts of the old medieval centre – altstadt – were pulverized. However, many of the buildings have been reconstructed in the post-war period. This applies to, among other things, the magnificent town hall, “Der Römer”, originally built in 1405. Gothe’s childhood home – the Goethehaus – has also been rebuilt, as well as the beautiful Paulskirche Church. Among the architectural sights of Frankfurt, the 14th-century Cathedral must also be mentioned. It was among the few old buildings that avoided major damage when the city was bombed.

As an example of modern monumental architecture, the 1997 Commerzbank Tower has a dominant place in the cityscape. At the time of the performance, this was Europe’s tallest building. The tower itself is 259 metres high, but the antenna is expected to be 300 metres.

In the Sachsenhausen district (not to be confused with the former concentration camp north of Berlin), you will find Frankfurt’s largest amusement quarter.

Frankfurt was one of the German cities most destroyed during world war two. World war ii. However, many of the buildings have been reconstructed in the post-war period.

It is very exciting to consider for those who have Frankfurt as their starting point and who want to explore the surroundings with a rental car. Driving is both easy and comfortable in Germany, as well as the fact that you usually get there quickly. Here are some tips for easy-to-implement and where you’ll get unique experiences. 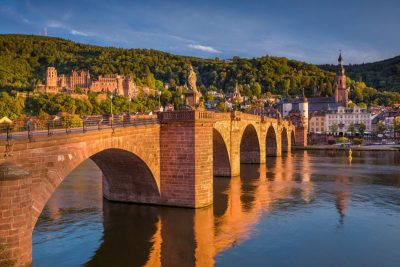 The Germans describe Heidelberg as one of the country’s most beautiful cities.

Heidelberg – One of Europe’s prettiest and most romantic cities

Heidelberg is today known for having one of the best universities on the continent, and is also a centre for advanced research in a number of fields. The city also has long traditions in art and culture. The Germans themselves describe Heidelberg as one of the country’s most beautiful cities, especially the Old Town (Altstadt). The old town has many magnificent buildings that were built in the early Middle Agesand are dominated by a fortress that rises 200 metres above the city centre. All this is combined with friendly residents and a romantic and pleasant atmosphere. 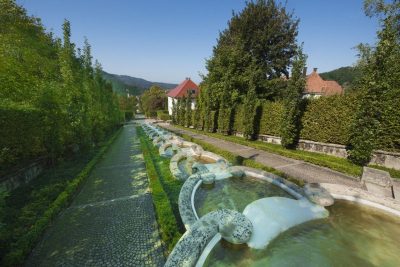 The spa town of Baden-Baden is located on top of hot springs.

As the name indicates, Baden-Baden is a spa town located on top of hot springs. The city was an important center in this part of Europe already a few hundred years before our era. The somewhat strange name is due to the fact that the town of Baden is located in the district called the same. Here people travel to get spa treatment, swim in the thermal springs,stroll in the beautiful parks, look at the city’s impressive architecture, and enjoy a quiet and pleasant atmosphere. Among the city’s top attractions are the cable car leading up to the Merkuruisberg mountain. The course is considered both the steepest and longest in Germany. Both the trip up, and your stay at the top, give you a wonderful view of the countryside. 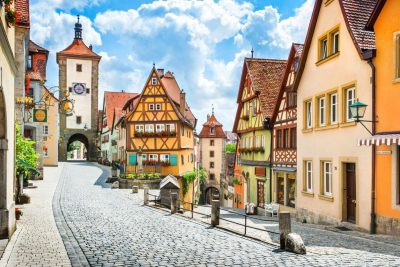 Rothenburg is a very well-preserved middle derby located in the Franconian part of the German free state of Bavaria. The city’s beautiful center is located on a hill above the River Tauber and consists of an adventurous settlement. Here there are many cozy cobbled small streets, with cafes, restaurants and shops decorated with flowers, and many sights worth catching up with. Highlights include the city’s impressive 13th-century town hall, the city walls surrounding the old town, the castle garden, and the picturesque district of Plönlein.

Bamberg’s Old Town is one of the finest in Germany and is a UNESCO World Heritage Site. In addition to bamberg being a particularly pretty small town, it is known for one of the country’s best Christmas markets,not to mention the traditions of brewing good beer. Here, small breweries are located close in the city centre, and several of them have been doing for many centuries. This district has for a long time brewed beer varieties that are characterized by the fact that the malt is smoked, and the beer thus acquires a rather unique taste. If you take an excursion from Frankfurt here, you should treat yourself at least 24 hours. Place your rental car in the hotel’s garage and explore the beautiful small streets. Stop by the legendary breweries and taste the food and beverages. 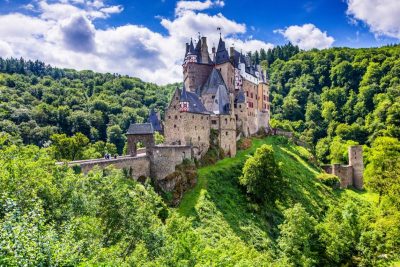 Burg Eltz is one of the most famous among Germany’s many impressive castles and castles. It is also considered one of the most romantic. Most of us have probably seen pictures of the nearly 900-year-old castle– but perhaps without further knowledge of it. If you’re in Frankfurt, you have the opportunity. Even if Eltz is remote, it is quite possible to drive all the way. Place the rental car in the corresponding parking lot. You can also park below the top, and then stroll up to the castle through the forest. Please note that Burg Eltz is closed in winter and normally open from early April, until early November. The guided tour on the in and out of Eltz starts every fifteen minutes. 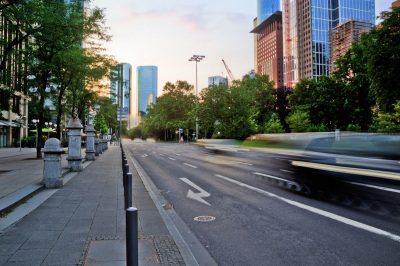 In Frankfurt it is advantageous to put the car in a parking garage, as there are few parking spaces outdoors.

It is at times very challenging to find parking in the streets of Frankfurt. Like many other German cities, much is done to limit car traffic in the city centre, for the sake of the environment and the health of its inhabitants. The number of parking spaces is low, and there are different zones that regulate where one can park, and at what times. Like many other places, it is best to bet on the parking garages here as well.

Driving in the city is not particularly challenging, although in Frankfurt you also encounter narrow streets, one-way roads and cul-de-sacs. Outside the city centre, both on country roads and motorways, it is easy to drive in most of Germany. Please note that motorists are speeding higher on the motorways than many are used to, and you quickly become a slower if you are in the left lane. 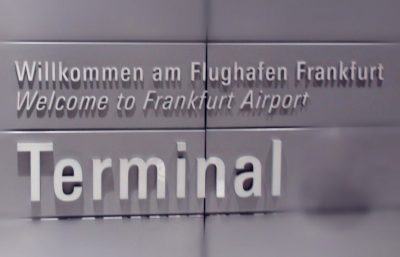 The airport in Frankfurt is divided into two terminals.

Frankfurt am Main Airport is also called Flughafen Frankfurt am Main, and is the fourth busiest airport in Europe. There are approximately 70 million passengers a year served here. The airport has two terminal buildings, and where you end up depends on which airline you’ve used, no matter where you flew from. This is unlike most other airports that divide in to domestic and international flights. Terminal 1 is the largest, taking about 75% of all traffic.

Currently there are 11 car hire companies at frankfurt airport, and all are represented at both terminals. The companies include the most well-known and international players, including Budget, Hertz, Thrifty, Sixt and Avis. Please note that the delivery of a rental car can normally be made at both terminals, with a few exceptions. Ask the company you are renting from if you have any doubts (usually you will receive this on the booking confirmation), and you will not have to spend time figuring out what is the right place for the return.