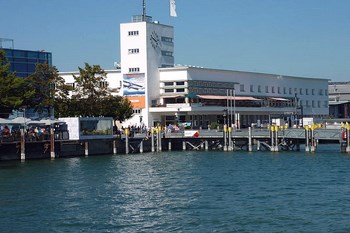 Friedrichshafen is located on the north side of Lake Constance in the state of Baden-Württemberg in southern Germany near the border with Switzerland and Austria.Friedrichshafen has a population of 59 286 (2011) inhabitants.

Approximately two-thirds of the city was destroyed during the 2nd World War. The most severe bombing took place on 28 april 1944, and destroyed most of the old town center.

Friedrichshafen was previously best known as the hometown of the Zeppelin airship company and the Dornier Flugzeugwerke.  In 1899 began Count Ferdinand von Zeppelin began construction of its first dirigible balloon and the year after flying air balloon three times over the Bodensee. It was then founded a company to develop the technology, and in 1908 the military could buy the finished airship Z3

There is a museum on Lake Constance where one can learn about the history of the zeppelin holders. In recent years, a number of small Zeppelin airships (Zeppelin NT), have been built using modern technology, and these can be booked for sightseeing tours. Dornier Museum at the airport is another museum devoted to aviation and its history.

Each year, the city’s aviation competition where the latest European aircraft participating.

To go hiking or cycling along the promenade on Lake Constance is a popular activity in Friedrichshafen. Graf-Zeppelin-Haus Cultural Center has become a popular location for conventions, conferences and other events.

Friedrichshafen Airport is 3 km north of the city.