Compare prices and find cheap car hire on Fuerteventura from well-known and local car hire companies. Insurances and unlimited mileage are included. Save up to 70% on car rental at Fuerteventura through us.

Fuerteventura is a Spanish island located in the Atlantic Ocean off the coast of Africa and is the second largest of the Canary Islands. The island has around 116,800 inhabitants. The largest city is Puerto del Rosario.

The island is only 60 miles (97 km) off Africa and has a desert landscape– where the wind has carried sand across the Atlantic ocean from the Sahara. The climate is dry and warm, the temperature rarely drops below 18 degrees and rarely rises above 32 degrees. It is the warmest in the Canary Islands and has around 300 days of sunshine a year.

There is little natural vegetation and wildlife and there is no fresh water on the island. Goats, by the way, can be seen a lot – there are twice as many goats as humans on the island. The white goat cheese majeros is produced here and is known internationally for its good taste.

The highest point is Pico de Zarza at 807 meters above sea level, which is located at the very south.

Scenes from the world-famous films Star Wars and Wonder Woman 2 have been recorded on the island, as well as several music videos.

There is little natural vegetation and wildlife and there is no fresh water on the island.

Fuerteventura is primarily known for the wonderful beaches that are among the best in Europe. White fine-grained sand and crystal clear turquoise water lure more tourists to the island. There are a total of 152 beaches, so there are opportunities to find their very own beach. The desert landscape is protected, so it is untouched unlike the mini-desert of Gran Canaria.

Surfers from all over the world head to “Hawaii of Europe” to experience the waves. The island is a paradise for water activities! The best surf beaches can be found on the east coast and by the town of Corralejo. Life underwater should also be explored and boat trips to the unknown and uninhabited Canary Island of Isla de Lobos where there are good opportunities for snorkeling. Several agencies arrange both whale and dolphin safaris with a guide where you can experience close contact with dolphins. In the city of Ajuy you can experience exciting caves, which were previously hidden places for pirates.

In the historic town of Betancuria you can get round trips to many of the ancient religious buildings. Villa Winter which was built by german engineer Gustav Winter during World War II is worth a visit, here there are many stories about the house.

Surfers from all over the world head to “Hawaii of Europe” to experience the waves.

Fuerteventura is a pretty exciting island to explore by car rental. Here you will find many pleasant little fishing villages,and the mountains provide a nice contrast to the many beaches and the sea. To show distances to the different proposals is not appropriate on Fuerteventura. The distances are not all the world, and people choose to stay in different places. For example, if you were to drive without a stop between Corralejo in the far north, and Morro Jable in the far south, the trip would take you well under 2 hours.

On the northern tip of Fuerteventura lies Corralejo. This is perhaps the island’s most popular seaside resort and holiday destination. The city itself has a nice and old charm above it. There are several good eateries there, decent opportunities for shopping, and some sights that can be nice to get with them. The large migratory patch, however, is the huge sandy beach and dunes located just south of corralejo’s old port. Here it is over 8 kilometers of chalky white sand, and since the road runs along the beach, it is easy to choose where you want to settle down. The easiest and most comfortable is to park at one of the major hotels located near Corralejo. Then you have restaurants, bars, toilets, showers, sun loungers and activities to take for you.

Over five miles of chalk white beach can be found in Corralejo. 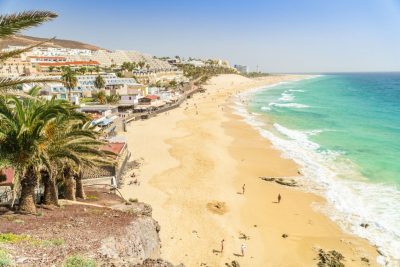 Some of the most beautiful beaches on the island can be found at Morro Jable.

At the very bottom of fuerteventura lies the old fishing village of Morro Jable. Here you will find some of the island’s finest beaches, and they go more or less in one all the way to the seaside resort of Costa Calma which is almost two miles further north. The city is quite quiet, and is preferred mostly by families who are on holiday at Fuerteventura. There are several good restaurants here, some sights, and a lot to do on the beach. Perhaps the most popular activity is to go from Morro Jable up to Pico de la Zarza. This is the island’s highest point, and 807 meters above sea level. To explore the other Canary Islands, there is a ferry from Morro Jable to both Gran Canaria (Las Palmas) and Tenerife (Santa Cruz). 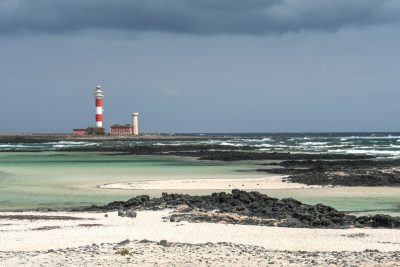 El Cotillo is a small town located on the island’s northwest side. The place is especially preferred among surfers, because here the Atlantic Ocean is challenging. Nevertheless, there are several good swimming spots in the area, such as La Concha and Los Lagos located on the north side of El Cotillo. There, the beaches are lovely, and the water is quieter than further south of the city, and you will find several lagoons suitable for swimming. There are still people in El Cotillo who live like fishermen, something you can enjoy at one of the city’s pleasant restaurants. Among the sights, the old and fortified lighthouse Fortaleza del Tostón stands out. It was built in the 1790s and is still in use.

There are several wonderful vantage points on the island and which are especially popular for those who want to watch the sunset in the beautiful landscape. Many people head to places like Barranco de los Canarios, but several of these go off the beaten track, and thus something you should avoid with car hire. A better option thus is to drive to Mirador de Morro Velosa. There is a small café, with phenomenal views, and which is open from 10.00 to 18.00 all days except Sunday and Monday. This is close to the village of Betancuria, which is also worth a trip by. 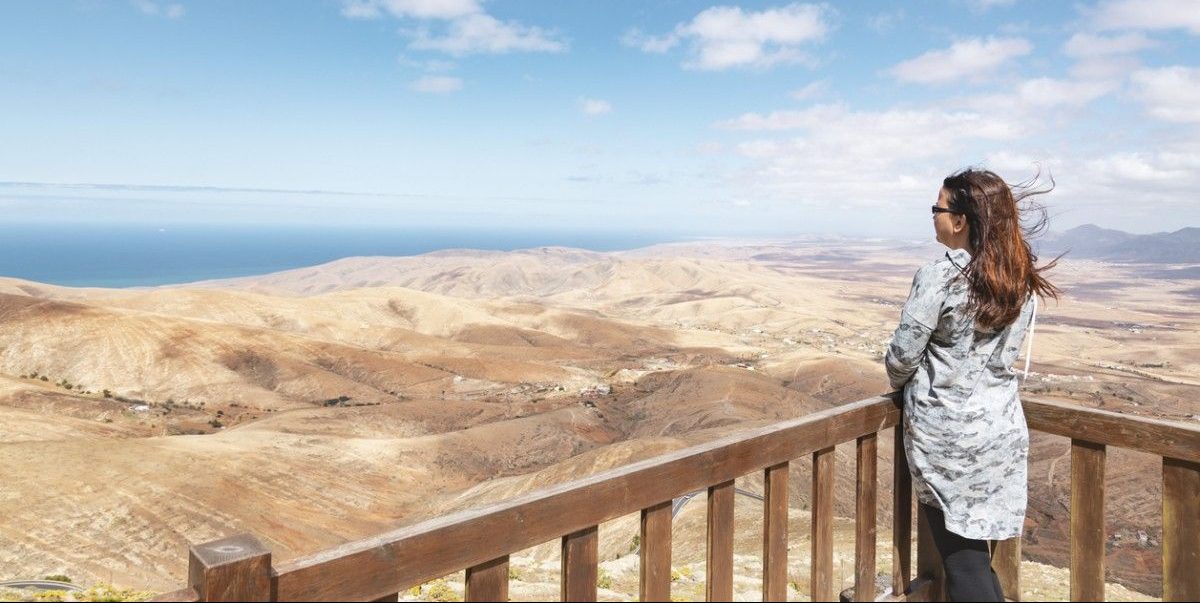 Although Oasis Park in La Lajita may primarily cater to the youngest, the park is also worth a visit for adults. This is probably the most beautiful zoo in the Canary Islands, and it also has a pretty botanical garden attached. In the zoo you will find over 3000 animals belonging to over 250 species. It is allowed to feed them if you buy suitable candy in your own dedicated kiosks. Every day there are several shows in the park, and especially the show with birds of prey is really an experience. The best day of the week to stop by Oasis Park is Sundays. Then there is also the market here, where local craftsmen and artists sell their creations. 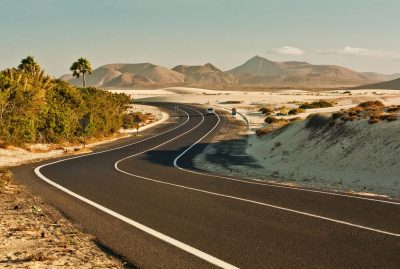 The roads on the island are usually good to drive on and it is easy to get there.

The main roads at Fuerteventura are usually good, and it is quite easy to drive around the island. Please note, however, that the many roundabouts are quite new by date, and many of the island’s inhabitants do not use the roundabouts as we are accustomed to. Here are shortcuts taken, and who has a driving rights seems to be unclear to some drivers.

Inside the small towns it can be difficult to find street parking, but usually there are larger parking spaces. Guests can also use the hotel’s parking when visiting various beaches on the island.

Watch where you drive on Fuerteventura

Please note that the insurance on the rental car usually applies only when driving where there is road surface. This is especially important on islands such as Fuerteventura, where many may be tempted to drive to, for example, the beach in Cofete. In this case, part of that drive will run in some rough terrain, and definitely not on paved roads. As a result, you may be liable for damages in the event of an accident, or in the event of car damage, and some car hire companies may charge additional fees for such things.

Please also remember to clarify with the car rental company in advance if you wish to take your car on the ferries to one of the other Canary Islands.

You should stay away from sandy beaches with the rental car.

Fuerteventura Airport is also called El Matorral Airport, and is located on the coast just south of the island’s capital Puerto del Rosario. The airport serves just under 6 million passengers annually, most of whom are tourists on a beach holiday. There is only one terminal building, with a concourse on the second floor, and the arrival hall on the ground floor.

The companies that offer car hire are all gathered in the arrivals hall of the terminal building. Currently there are nine players, including Avis, Hertz, Europcar and Sixt, as well as a couple of Spanish and German car rental companies.