Compare prices and find cheap car hire on Gran Canaria from well-known and local car hire companies. Insurances and unlimited mileage are included. Save up to 70% on car rental in Gran Canaria through us. 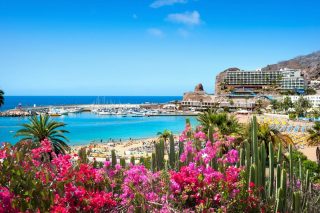 Gran Canaria is part of the Canary Islands belonging to Spain and is the second southernmost island. With a population of about 840,000, it is the second largest of the Canary Islands after Tenerife. The first Europeans on the island in the 15th century called the inhabitants of Kanari, which was the origin of the collective designation of all the surrounding islands. The island is made up of volcanic rocks, in the north of the country there are two extinct volcanoes to visit.

The largest industry on the island is tourism, followed by agriculture against export production. There is also Europe’s only coffee plantation. Gran Canaria has the most varied nature of all the Canary Islands. The highest peak is Morro de la Agujereada at 1956 m above sea level, while it was traditionally thought to be Pico de las Nieves (1949 m).

The island is a favorite tourist destination with its warm stable climate all year round. Many travel here especially in winter to enjoy the sun and the island is among Europe’s biggest destinations for golf enthusiasts. Although many people associate Gran Canaria with beach holidays, there are many activities and sights to explore. Old cozy small towns, hiking in the mountains,vineyards and banana plantations, amusement parks and exploring caves.

The city life with good shopping and the best shops can be found in the province’s capital Las Palmas. If you want a vibrant nightlife, head to Playa del Inglés with its large nightclubs and pubs. At the restaurants you should taste the local specialties with fresh fish, squid and shellfish, papas arrugadas – wrinkled potatoes, the local beer Tropical, queso de cabra – Canarian goat cheese and of course tapas.

In historic Gáldar you can experience the Cueva Pintada archaeological park with well-preserved indigenous cave paintings. In the museum you can see pottery, ancient coins and more excavated from the area, as well as a 3D show showing the former life of the indigenous people.

Barranco de Guayadeque is a 10 km long ravine from the coast and up in the mountains. If you are not saturated with history, the town of Guayadeque offers historical caves that were used as tombs for the indigenous people, where in recent times many archaeological discoveries have been made. Several of the caves are currently inhabited, but significantly upgraded and modernized.

In the old town of Vegueta you can experience “La ruta de tapas” every Thursday where you go from bar to bar and taste simple tapas dishes.

Gran Canaria has a unique landscape, here from a cave on Playa del Cura.

It’s almost a must to have a rental car in Gran Canaria. Although most people travel here to bathe and soak up the sun, you should experience some of the many exciting and beautiful small towns and sights. There are also a number of beautiful natural areas here that are worth a visit, and especially those located up in the mountains of the volcano island. Here we have picked out some of the most popular driving outs.

Distance and driving time to the sights

As people stay in different places in Gran Canaria, it is not appropriate to include distances and mileage. You’re never far away when you have a rental car. For example, if you’re going to drive from Las Palmas to Roque Nublo, which stands at the top and about the middle of the island, it’s no more than about 30 miles each way. You usually spend just over an hour driving. Driving a full circle around the island, and along the coast, will take you about 3 hours. 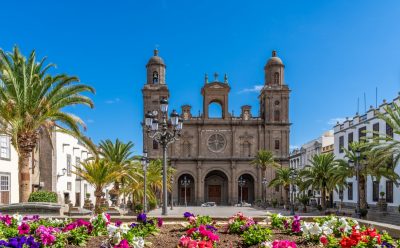 Cathedral Santa Ana – one of the beautiful buildings of Las Palmas.

Las Palmas is Spain’s ninth largest city, with approximately 390,000 inhabitants. Here you get a lively and urban break from the bathing life, and can take care of museums, restaurants, sights and experiences you can’t find otherwise on the island. One of the largest draw plasters is the old town vegueta. This was formerly the “capital” of the island, and also where you will find the most exciting buildings. Here you can visit Casa de Colón, the house Christopher Columbus often lived in when he was planning his expeditions. The beautiful Santa Ana Cathedral is also among the highlights. Otherwise, Las Palmas is a good city to shop in, there are many good restaurants there, and you can of course also swim and sunbathe on the beaches located on either side of the city center. 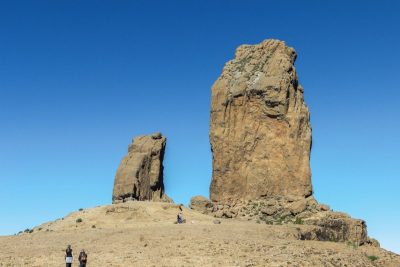 Roque Nublo – The Stone in the Clouds

Perhaps the most famous landmark in Gran Canaria is the volcanic stone Roque Nublo. The name means such a thing as the stone in the clouds. It looks like a monolith, stretching almost 90 meters straight to the weather. Next to Roque Nublo stands the “little brother” Roque de la Rana. Probably the rocks were made in a volcanic eruption several million years ago. People travel to Roque Nublo to enjoy the view, take impressive photos, and to go for a walk in the unique landscape. There are several paths here that are well marked. You can’t drive all the way to the rock, but park about 1.5 kilometres below the top.

Maspalomas is the name of both the seaside resort located right next to Playa del Ingles, and the 12 km long beach located by the city. The beach turns into a huge sand dune that extends all the way to the place of Meloneras. There you will also find one of the island’s most famous sights, the Faro de Maspalomas lighthouse. The sand dune is a protected area, with nesting places for many bird species. Therefore, you can not stroll on the moon there, but instead have to use the marked paths that run through the sand dune. You can also rent yourself a camel if you can’t walk yourself. A visit to Gran Canaria should include a trip to the miniature desert of Dunas de Maspalomas, if nothing else to enjoy one of the island’s best beaches.

The miniature desert of Dunas de Maspalomas is worth a visit when you are in Gran Canaria. 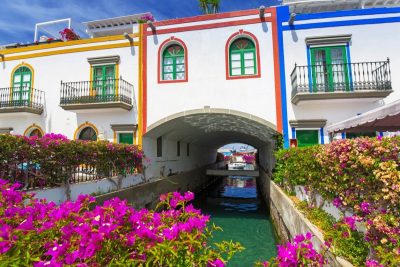 The city is called “Little Venice” with its small canals and beautiful houses built in Italian style.

The small fishing village of Puerto de Mogán is called locally “Little Venice”. This is because the village is characterized among other things by small canals, magnificent gardens, small houses built in Italian style,and cozy small streets and alleys. Many believe that Puerto de Mogán is Gran Canaria’s most beautiful city or town. Here you will also find one of the island’s best sandy beaches. The beach is located at the end of a small bay, with quiet and comfortable water suitable for swimming for the whole family. The best day to visit the village on is Friday. Then there is large market in the city center, and people come from all over the island to offer souvenirs, delicacies, crafts, and much more. Puerto de Mogán also has several attractions worth catching up with, including a submarine that you can get a ride with. 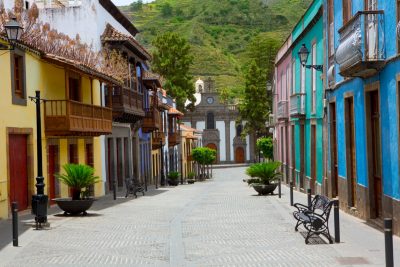 The basilica at the end of the street with colorful houses.

Teror – Village surrounded by the island’s most beautiful scenery

The small mountain village of Teror is also among the small towns on the island that must be experienced. It is not too far away from the aforementioned Firgas, and thus on the north side of the island, near Las Palmas. Here the architecture is quite unique. Many of the houses are from the colonial era, and are several hundred years old. Here, pilgrims have made their way through history, mostly to see the famous basilica honoring the Virgin Mary. Every Sunday there is a market in Teror, where most of it is about delicious food and drinks. Like Firgas, Teror is also known for its good spring water. Teror’s surroundings are at least as great as the village itself. If you stop by, make time to visit Parque Rural de Doramas. Just 1.2 miles from Teror, this area is a lovely place to take a stroll.

Firgas is one of the many beautiful small towns of Gran Canaria, and also among the oldest. It was founded in 1488 slightly up in the mountains, just a few kilometers west of Las Palmas. The most famous city is the town hall, with its main square square, and the impressive Paseo de Gran Canaria stairwell. This is one of the prettiest and most unique streets you will find in Europe. The stairs run on both sides of an artificial waterfall with 30 meters fall. The waterfall is decorated and dandered with flowers, and along the house walls you will see beautiful reliefs symbolizing the island’s various districts. There are also other pretty edifices in Firgas, and a variety of pleasant restaurants serving local specialties. Firgas is otherwise known for having the best drinking water in the Canary Islands, and here you also get a great view of the countryside and to the Atlantic Ocean. 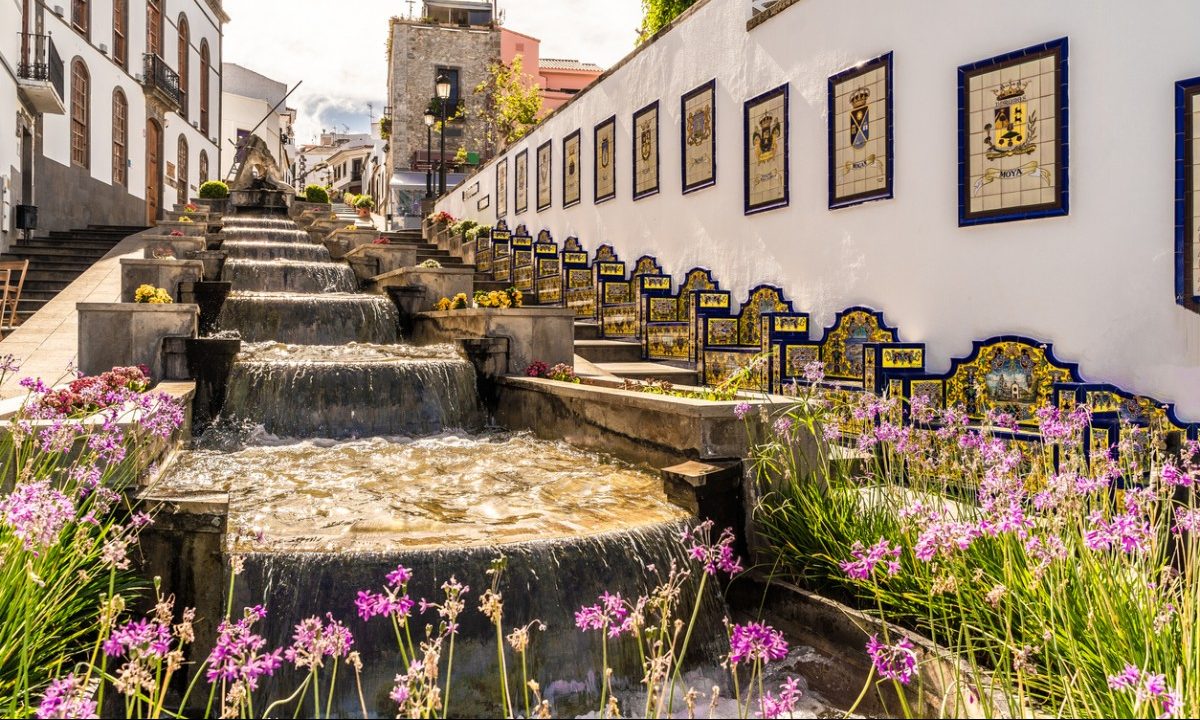 One of the most unique streets you will find in Europe is the impressive Paseo de Gran Canaria stairwell. The stairs run on both sides of an artificial waterfall with 30 meters fall.

It is mostly easy to find parking in most places in Gran Canaria. Either you find parking spaces with guards, or you put the car in the marked space (marked with blue lines). In the streets where it is allowed to park you pay at the vending machine that is on the sidewalks and must leave the receipt visible in the windshield of the rental car.

In the center of Las Palmas there is something harder to find parking in the streets, but here you have several parking garages to choose from.

It’s easy to drive in Gran Canaria to move along the east coast. The highway that runs from Las Palmas to Arguineguin is good, and traffic rarely close. However, it is more challenging to drive inland on the island and up the mountain. The road is winding and a little narrow. In the mountains one should drive carefully and pay extra attention.

It’s easy to drive in Gran Canaria when you’re moving along the east coast, but drive carefully and pay extra attention if you’re going up in the mountains. 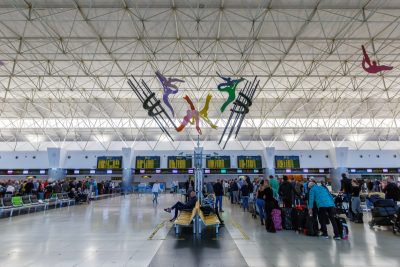 Despite the fact that there are over 11 million passengers at the airport annually, it is clear and easy to find.

The airport on the famous holiday island is officially called Gran Canaria Airport (Aeropuerto de Gran Canaria), but is often called Grando Airport by the island’s inhabitants. It is ranked as Spain’s fifth largest, with almost 11 million passengers per year. In addition to a high number of charter flights, Ryan Air lands at Grando Airport, among others. Gran Canaria Airport is located on the island’s east side, and between the capital Las Palmas and the most famous resorts.

Although the airport handles many passengers, it is clear and straightforward. All car hire companies are gathered approximately in the middle of the terminal building, with counters next to each other. As of today there are 11 companies offering car hire at the airport. These include the largest international players, such as Europcar, Hertz, Thrifty, Budget and Sixt, a German car hire company, and a car hire company operating only in the Canary Islands (TopCar).