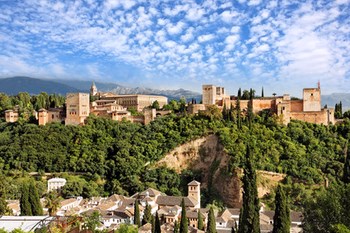 Granada in southern Spain – 68 km north of the Mediterranean coast and belongs to the region of Andalucia.The city has 240,000 inhabitants (2011), and is the capital of the province of Granada.

Granada is situated where the rivers Darro and Genil meet – at the foot of the Sierra Nevada.

It has a university, founded in 1531 and is one of Spain’s premier.

The most famous tourist attraction in Granada, the palace and the beautiful Moorish Alhambra Palace – built in 1200 – 1300’s. Alhambra means “the red castle”, is located on a hill and is a UNESCO World Heritage Site.

Within the fort walls are several beautiful gardens and a historical museum. The Alhambra, one has a spectacular view of the city and region.

Other attractions include Granada Old Town – with its Arab character, Granada Cathedral from the 1500s, “Royal Chapel” of the 1500s, an archaeological and ethnographic museum, art museum, science museum – with interactive exhibits, bullring and a botanical garden.

In addition, water park “Aquavit” slightly off center, and in the center of Granada’s great shopping and a diverse nightlife.

Granada hosts several annual festivals and events – including a film festival, a tango festival and several art and music festivals.