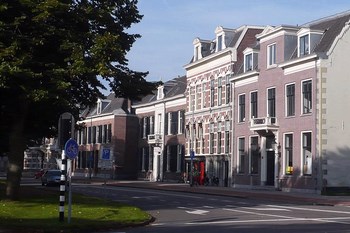 Haarlem lies to the west of the Netherlands the river Spaarne, and is the capital of the province of Noord-Holland.The city has 150,000 inhabitants (2011). Haarlem is located 7 miles east of the North Sea coast og18 km west of Amsterdam.

Haarlem received city status in 1245, and has since the 1600s been Nederlands main district for bulb cultivation. The city is famous for its annual flower exhibition Keukenhof (just south of downtown) – which takes place in the period from March to May. For this reason, Haarlem often called City of Flowers (“Bloemenstad”).

Haarlem has preserved many old buildings and the square “Grote Markt”, St.-Bavo church with its 75 meter high tower. The church was built in the period 1370 to 1520. Also the Hall from the 1200s is located here. In the area one can also see the “Amsterdamse Poort” from the end of the 1300s, which are remnants of the old city wall.

Other tourist attractions in Haarlem include Frans Hals Museum, located in the old building “Oude Mannanhuis” from 1608. The museum is devoted to the painter Frans Hals’ life and work, and here you can see exhibitions of his paintings, prints, sculptures and ceramics.