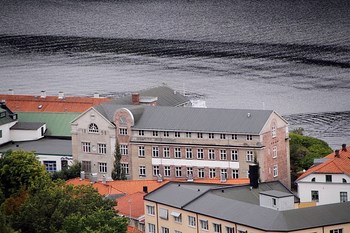 Halden is a city with a population of 29 797 (2012) inhabitants situated in Østfold county, at the mouth of the Tista Iddefjorden.The municipality borders in the south to Sweden, in the east to Aremark, in the west of Sarpsborg and Rakkestad in the north.

In Halden watercourse located Brekke-locks and a boat trip is a special experience that one probably will not forget anytime soon. Brekke-locks are the highest locks in northern Europe with a height of 27 meters. One may take the trip by steamship tourists who are 125 years or motor ship “Strømsfoss.”

Fredriksten fortress that played a very important role during the celebration of the union with Sweden in 1905, is Haldens main known brand and is situated on a hill overlooking the city. Around 200,000 tourists visit the castle in the summer and fortress also has a beautiful park.

Halden is a major Norwegian industrial city with about 2,500 industrial jobs. Especially famous is the mill for Norwegian Forest Saugbrugs, the oldest wood processing factory, which is still in operation. In the 50’s it was every five shoes Norway produced in Halden and until 1960 was known as Norway’s footwear capital.Halden also an important port for the wood processing industry.