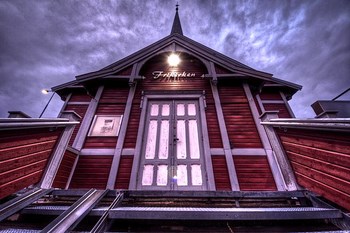 Hamar is a city and a municipality in Hedmark county located 120 km north of Oslo.Hamar has a population of 30   921 (2012) inhabitants.The city is also the county seat of administration Hedmark county. The people lived in Hamar area as early as 4,000 years ago. From 400’s were big yard Field in Vang powerhouse and the court, and under Harald Hard Council (1015-1066) reign, the city was referred to as kaupang. Hamar became a bishopric as early as 1152.

Traditionally known as Hamar railroad town, meet in Rørosbanen, Eidsvold-Hamar and the Dovre Line. The city has always been an important kommunikasjonsounkt.

Major sights that are worth checking out in Hamar is the Norwegian Railway Museum, Cathedral ruins, Hedmark Museum and the Viking Ship. The city is beautifully situated at the lake, and in the summer months it is popular to go on an outing with the world’s oldest steamship in use Skibladner.

Hamar was one of the verses towns during the Winter Olympics in Lillehammer in 1994. Skating races, for example, held in the famous Viking Ship Hall is one of the world’s largest.

The nearest major airport Gardermoen Airport is located 90 km to the south.