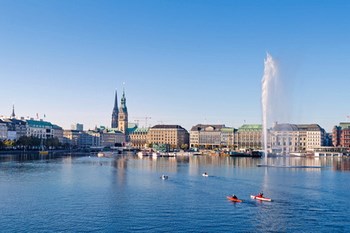 Hamburg (official name: Freie and Hanseatic City of Hamburg), is a “city-state” in northern Germany.It is located on the river Elbe, and the distance to the North Sea is about. 110 km. Hamburg is considered one of the world’s largest and most important port cities. The population of the city is around 1.8 million (2010).

Around 800, the castle was built Hammaburg the banks of the Elbe, and around the fortress grew as the town until later. During the Middle Ages, Hamburg – next Lübeck – the main city of the Hanseatic League.

During the second world war, much of the city was destroyed by Allied bombers, but it was during the 1950 – and 1960-year restoration. Today, the Hamburg as a very modern and busy European city.

There are a number of attractions of various kinds in Hamburg. Perhaps the most famous is the Tierpark Hagenbeck – Germany’s most beautiful and traditional zoo. It was built as early as 1907, and currently includes more than 2,500 animals (of 360 species). The park is constantly expanded, and in the current issue of the park has all the animals plenty of room, and receive revel in such natural areas as possible. At the 100-year anniversary in 2007, it opened a new tropical aquarium with sharks and crocodiles.

A more traditional art institution, Hamburger Kunsthalle, which houses the largest and most important art gallery. Here is the exhibited works of art both by old masters such as Rembrandt and Rubens – and by famous modernists such as Jeff Koons and Andy Warhol. Also, the National Museum and the Museum für Kunst und Gewerbe are popular destinations.

Some of Hamburg’s most famous buildings include St Michaeli church from 1786 with its 82 meter high tower and the monumental building Speicherstadt end of 1885.

There are also many green spaces in Hamburg. Most important, the Alster Lake in the heart of the city – and the gardens around it. There are several outdoor activities, including sailing, rowing and canoeing – in addition to pure relaxation and recreation. Also the beautiful Planten un Blumen (Low German for Pflanzen und Blumen) is a popular tourist destination. This was established already in 1886.

The nearest airport is Hamburg Airport, which is located in the Fuhlsbüttel – 8.5 miles north of Hamburg city center.