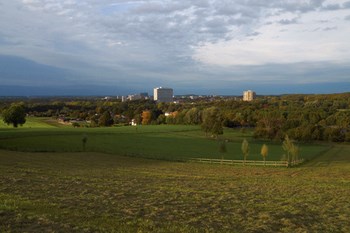 Heerlen is located southeast of the Netherlands in the province of Limburg – near the border with Germany.The city has 89,000 inhabitants (2011), but it is estimated suburbs, its population rises to almost 270,000.

Heerlen became a center for the coal mining industry in the late 1800’s, but the mines were closed in 1974. However, there is a coal mine museum in the city.

A popular tourist attraction in Heerlen is Hoensbroek Castle – where the oldest parts are from the 1360’s. This is one of the largest castles in Netherlands, located in the scenic surroundings.

Also the Roman Catholic Sint-Pancratius church from the 1100s, a visit.

Other major attractions include Heerlen water mill “Oliemolen” from 1502, water mill “Weltermolen” from 1381 and Thermenmuseum – with its impressive remains of a Roman bath from 120 BCKr. The museum has a varied collection of artifacts from the Roman era.

Another popular tourist attraction in the city is “City Heerlen” – a museum of modern art. The art museum is located in the building “Glaspaleis” from 1932, which is now a cultural center.

It is also great shopping in Heerlen with both stores and malls.