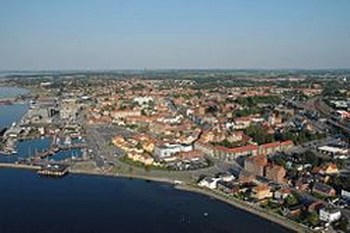 Holbæk located northwest of the island of Zealand in Denmark, and has about 27,000 inhabitants (2011).The city is located on the south side of Holbæk Fjord (which is part of Isefjorden) – approx. 35 km west of the city Roskilde.

Holbæk is one of Zealand’s oldest cities, and received its town charter in 1240. Today the city is a major trading center, and there are good connections to Copenhagen via highway and railway. Holbæk is known for its beautiful waterfront location and its many cozy cafes. The downtown core is still the well-preserved medieval street pattern, giving the city a very charming atmosphere.

Holbæk has several tourist attractions – including Skt. Nikolaj Church from 1872 (the city’s largest church), stone church Tveje Merlose church from the 1100s, Holbæk Museum – Cultural City Museum, which was founded in 1910 and the Art Gallery “Æglageret” – with its changing exhibitions.