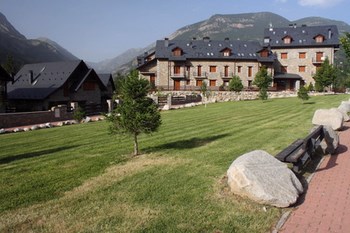 Huesca has 52,000 inhabitants (2011), and is situated on the river Isuela – 488 meters The city has a continental Mediterranean climate, with hot, dry summers and mild to cool winters.

Huesca was heavily damaged during the Spanish Civil War in the period 1936 – 1939 but still has many interesting buildings of historical and architectural significance.

Some of the most visited sights in Huesca include the Gothic cathedral from the 1200s – there is also a museum with exhibits of religious art, the two Romanesque churches “Miguel” and “Magdalena” – both from the 1100s, City Hall, from the 1500s, the remains of the city walls, the Basilica ” Lorenzo “from the 1300s, the monastery” San Pedro el Viejo “from the 1300s and an archaeological museum.

The city also has a historical museum, theater, bullring, casino and several parks and recreation areas.

30 km outside the city is the castle “Castillo de Loarre” from the 1200s, which also recommended a visit.