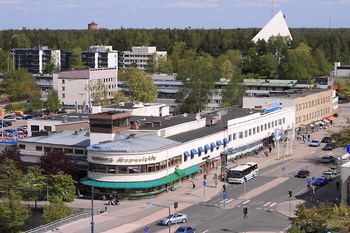 Hyvinkää is a city and municipality in the Uusimaa region, approximately 50 km north of the city of Helsinki. The city has a population of 45 569 (2012) inhabitants.

The city is a major hub for the railway, and the construction of the railroad through Finland in the late nineteenth century meant a rapid growth of the city.

Some of the more famous buildings in Hyvinkää include the church in 1961 and the manor Kytäjä. The Finnish Railway Museum is located in Hyvinkää. The city has a cultural center for children and adolescents, a textile museum and an art museum.

This is also Ruokangas Guitars is Finland’s leading manufacturer of guitars.

Among the golf enthusiasts, the city is known for Scandinavian Kytäjä golf course, situated on the countryside in Hyvinkää.

Hyvinkää Airport, the main airport in Finland in 1944-1947 because the Helsinki-Malmi Airport was used by the Allies during and after the war.Today it is a small airport, and

the closest major airport, Finland is Helsinki-Vantaa Airport is about 50 km from the city center.