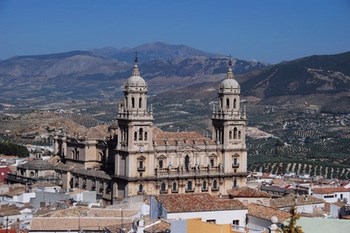 Jaén is located south of central Spain, and has been the capital of Jaén province since 1249.The city belongs to the Andalucia region, and has 117,000 inhabitants (2011).

Jaén is located at the foot of the hill Santa Catalina – near the river Guadalquivir and Guadalbullón.

Jaén is the administrative center and an industrial town – with great production and export of olive oil.

In recent years the city has experienced large growth in tourism – because of its rich history, its heritage and its scenic surroundings. In addition, a number of museums in Jaén and theaters, concert halls, markets, fairs and annual festivals. The city has also recently received a waterpark – which is an attraction for the whole family.

Some of the most popular attractions in the city include the large and impressive cathedral “Catedral de Jaén” – built in the period 1540 – 1801, Town Hall, from the 1600s, the church of San Bartolome and castle “Castillo de Santa Catalina” from 1246 – which is located on the hill Santa Catalina.

Also the Jewish Quarter of the Old City is a tourist attraction, with its narrow and steep streets. In addition, a visit to the art museum “Museo Internacional de Arte Ibero” and the city history museum – with its archaeological exhibits.