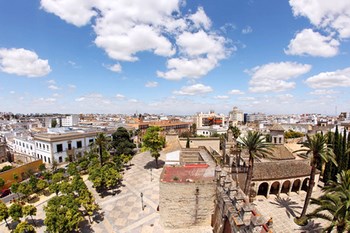 Jérez (officially: Jerez de la Frontera) is located in southwestern Spain – In the province of Cadiz.The city belongs to the Andalucia region, and is located 15 km from the Atlantic coast.

Jérez is an industrial city with 212,000 inhabitants (2011), and is famous for its sherry production. The city is also an important transport hub.

Jérez has a rich historical heritage with many beautiful churches, palaces and manor houses. There are many vineyards in this area, and some of them offer guided tours and tastings.

Some of the city’s most popular attractions are the City Hall from 1575, Jerez de la Frontera Cathedral from 1600-century church of San Miguel from the 1500s as well as the old Arab fortress “Alcazar” from the 900s. This is also the palace “Villavicencio Palace” from 1664 and a tower where visitors can get 360 degree panoramic views of the city.

Other tourist attractions include Jérez an archaeological museum, a wine museum, a clock museum, a bullring for museums, zoological and botanical garden, a theater and several art museums.

It is also great shopping in Jerez, with shops and malls.

The city hosts a number of annual festivals and events – including a flamenco festival and a popular horse market (in May).