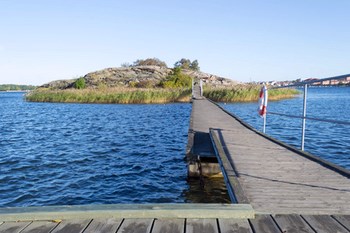 Karlskrona is a city located in the far southwest Blekinge in Sweden and has 35,212 inhabitants (2010).

The Swedish fleet has its headquarters in Karskrona, and here they include a sailor school. The shipyard   Karlskronavarvet AB includes the engineering industry.The old naval base in Karlskrona is a UNESCO World Heritage Site and Marine Museum is a popular tourist attraction in Karlskrona.

The city is named after Charles XI of Sweden and became a city in 1680.It is known for its friendly atmosphere and retains its original street plan. Since all the streets follow a grid pattern of the wind can blow freely from the sea straight into the heart of the city. Square of Karlskrona is the largest in Scandinavia, and in fact the second largest in Europe, after the red square in Moscow.

Outside the city is Karlskrona archipelago is the southernmost part of the Swedish archipelago. Several islands are connected to the city by ferry, and Karlskrona is therefore a popular destination in the summer.

One of the most important days of the year is the day before Midsummer Eve. Then held a large market called Lövmarknaden which is very popular with locals. Every year at the end of July / beginning of August it is a sailboat festival in the harbor.

The nearest airport is Ronneby 37 km from the city center. Kalmar Airport is 87 km north of Karlskrona.