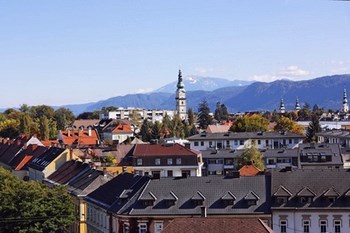 Klagenfurt (from 2007 Klagenfurt am Wörthersee) is the capital of the Austrian state of Carinthia, and has just under 100,000 inhabitants (2011). South of town is Karawanken mountains, which forms the border with Slovenia.West of the city lies Lake Wörth.

Klagenfurt is both an important industrial city and a transport hub. Besides, the city is known for its many trade fairs.

Klagenfurt was founded in the late 1100’s and became the capital of Carinthia in 1518. In 1544, the city was completely destroyed by a fire. After rebuilding the Klagenfurt the most important fortress in Austria. After 1 World War Yugoslavia demands on the town, but a referendum in 1920 ensured that remained Austrian Klagenfurt.

Klagenfurt receives a large influx of tourists every year – and the city has also many attractions to show off, including a number of interesting museums. One of the foremost is the historical museum “Kärntner Landes Museum”, which is one of the largest museums in Austria.Besides are several art museums in the city. The most famous is “Die Stadt Galerie Klagenfurt” – an exhibition of classic modernism and “Das Museum Modern Art Carinthia” – an exhibition of contemporary art.

There are also many scenic churches in the city, where Klagenfurter Dom from 1581 is the largest. It also functions as a cathedral for the Diocese of Gurk. Also the lovely church “Heiligengeistkirche” is a popular destination – and the former medieval monastery “Pin Viktring”.

One of the most important non-religious buildings in the city are “Landhaus Klagenfurt”, listed last in the 1500s. Parts of the building allocated today by the Parliament in Carinthia.

Otherwise, all the old center of Klagenfurt an attraction in itself. Also in areas around the city are a number of places – including twenty old castle and a number of beautiful parkland, there are also beautiful beaches and offering boat rentals.

The nearest airport is Klagenfurt Airport, which is located 3 miles northeast of downtown.