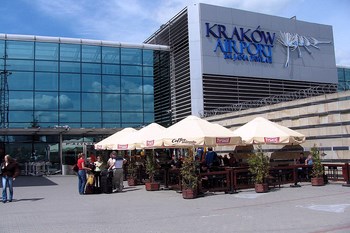 John Paul II Airport Kraków-Balice (KRK) is an international airport serving Kraków in Poland.It is located in the city of Balice, 11 km west of Krakow city center – and is named after the Polish-born Pope John Paul II, who lived many years in Kraków.

Kraków Airport was formerly a military airfield, but was in 1964 also adopted as a civilian airport. Around 3 million passengers pass through here every year, making the airport to Poland’s second busiest.

There are two passenger terminals at the airport: Terminal 1 handles international traffic, while the national is served by Terminal 2 There is free shuttle bus both between the two terminals and between terminals and railway station.

Transport possibilities between the airport and the center of Cracow are good. One can choose between train, bus or taxi. If you want to rent a car in Kraków, several international rental agencies represented at the airport – including Avis, Budget, Europcar, Hertz, National and Sixt.

There are a number of public facilities at Kraków Airport – including meeting rooms, VIP service, wireless internet, ATMs, post office – and a good selection of shops, restaurants and snack bars. The airport is also well adapted for the disabled.

Nearest hotels are Neohotel Airport, located a few kilometres from the airport.