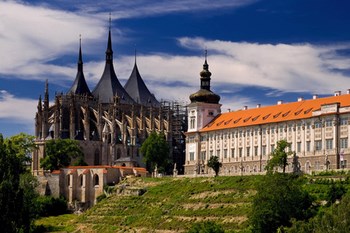 Kutna Hora is a city located in the in the middle of the country, about 70 miles east of Prague.

The city has its roots far back in history with both up-and downturns.. Kutna Hora was from 1200 – to 1700’s an important silver mining city, and it developed as a result of industry in the area. For a time it was one of the richest cities in Europe. Today there is a mining museum in the city. Due to the proximity of Prague it is customary to go on day trips to Kutna Hora, but there are several great hotels and restaurants in the small town.

The city is situated on a hill with large amounts of silver ore in the ground. During the medieval town made several attempts to surpass Prague both in terms of glory, wealth and power. The city has had several setbacks with conquests and fires in 1770 burned down large parts.

The Italian court from the late 1200s is the oldest building. It worked both as a banquet hall / court, royal residence and coin foundry. Another beautiful building is Santa Barbara Cathedral from the 1300s is a good example of gothic architecture. Crusaders brought earth from Jerusalem and this made the city a preferred graveyard because it would have sacred soil.