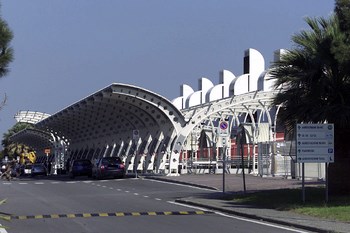 Lamezia Terme Airport (SUF) is an international airport located in southern Italy, about 14 km southwest of the center of the city of Lamezia Terme.

The airport serves about 2 million passengers annually and airlines like EasyJet, Ryanair, Alitalia and Blu-Express features both permanent and seasonal direct flights to and abroad.

The airport was opened in 1976 and has one terminal building. The facilities at the airport are relatively limited, but there are a few shops here (used sentences duty-free shop), self-service restaurant, bar, newspaper kiosk, information desk, bank, ATMs, VIP Lounge and wireless internet access.

There are no hotels at the airport, but only 2.5 km from the terminal building, the Grand Hotel Lamezia.

To get from Lamezia Terme Airport to downtown can take shuttle or taxi. If you want to rent a car in Lamezia Terme, a number of international car rental companies its affiliates in the arrival hall of the airport – including Avis, Europcar, Hertz and Sixt.