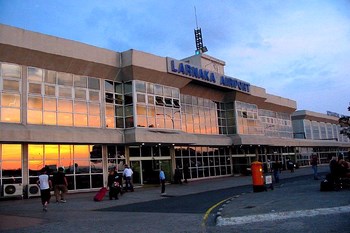 Larnaca International Airport (LCA) is located southeast of the island of Cyprus – about 6 km southwest of Larnaca center.This is the island’s main airport.

Larnaca Airport was opened in 1974 and serves about 5.2 million travelers in the year (2010). From here there are direct flights to several destinations, primarily to major cities in Europe and the Middle East. 36 airlines have direct flights from here – including Cyprus Airways, British Airways, Ryanair, EasyJet and Lufthansa.

Larnaca Airport has one terminal building. This is under development / upgrades and is scheduled to be ready in 2013. The current terminal building has relatively few facilities for travelers,   but there are a few shops and eateries here.In addition, banks, ATMs, post office, first aid station and tourist information desk. The airport is accessible for the disabled.

If you want to rent a car in Cyprus, has 7 car rental companies its branches at the arrival hall of the airport.There is also the reputed companies like Avis, Hertz, Europcar and Sixt.

There are no hotels at the airport, but there are several nearby.

To get to the center of Larnaca, one can take a taxi or bus.