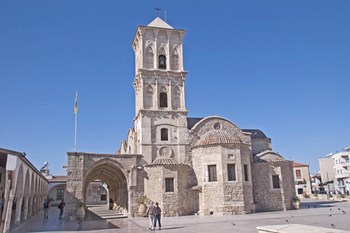 The port city of Larnaca is located southeast of the island of Cyprus in the Mediterranean, and has about 72,000 inhabitants (2010).Larnaca is a popular tourist destination and receives millions of visitors each year. Most tourists come for sun and beach holidays to Larnaca, and the city has great beaches.

Larnaca has several historic buildings and ruins and Lazarus Church from 900’s are a major tourist attraction. It is also “Larnaca Castle” – an Ottoman fort from the 1600s. The fort holds today a medieval museum, two archaeological museums, a natural history museum and a paleontological museum – where such can see an exhibition of dinosaur.

Approximately 5 km southwest of the city center Hala Sultan Mosque from 1816, which is also a popular sights. The mosque is considered one of the most important shrines in Islam.

The city has also many art galleries, an antiques museum and a theatre.

Larnaca has a lively nightlife with bars, pubs and clubs, and in the old town are also nice tavernas and small shops. Many tourists like to walk the beach promenade of Larnaca, where there are several restaurants, cafes and shops.

Larnaca International Airport is located 6 km southwest of the city.