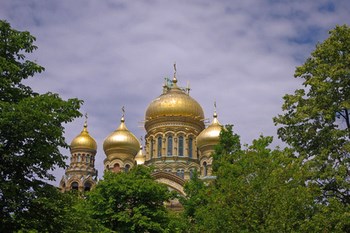 Liepaja is located on the southwest coast of Latvia on the Baltic Sea, and has 83,000 inhabitants (2012). Liepaja is the 3 largest city, located 200 km southwest of the capital Riga. The city has an important port, from ferries to Sweden and Germany.

Liepaja was founded in 1253, and the Municipal Court in 1625. The city is today a popular tourist and resort, and is perhaps best known for its beautiful sandy beaches along the coast. In addition, the city has a number of scenic churches and buildings in various styles.

Liepaja has a rich cultural life with art galleries, museums, historic and cultural monuments and a number of popular annual festivals.

Some of the most popular tourist attractions in Liepaja include the Roman Catholic Cathedral of St. Joseph from 1762, St. Anna’s Church from 1587 (one of Latvia’s oldest churches), the Russian Orthodox St. Nicholas Cathedral in 1903 and the Lutheran Holy Trinity Church from 1758 with its 55 meter high tower. The organ at Trinity Church is famous, and was until 1912 the world’s largest.