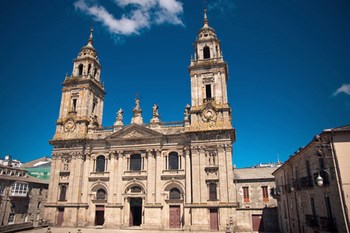 Lugo is located in northwest Spain, and is the capital of the province of the same name.The city belongs to the region Garcia and is located on the river Mino – about 160 km from the border with neighboring Portugal.

Lugo has about 98,000 inhabitants (2011). The city has a continental climate with cool winters and mild (for heat) summers.

The old town of Lugo is surrounded by Roman walls from 300’s. The city walls – which has a length of 2266 meters – is a UNESCO World Heritage Site. Walls also have 85 towers and 10 ports. The old town also has several other sights – including the beautiful Lugo Cathedral from the 1100s – with its renaissance tower.

Another point of Lugo’s Hall, originally from the 1300s, but has been restored several times throughout history – most recently in 1740.

Other popular attractions in Lugo is the city history museum – which has exhibits related to Celtic jewelry and mosaics made of Roman artists. It is also an art museum here.

In addition, Roman bath in Lugo and the Roman bridge over the river Mino.

It is also good shopping center with boutiques and department stores.