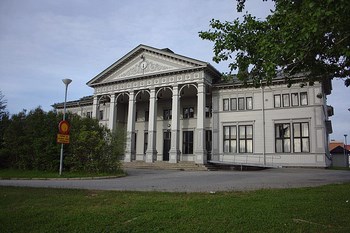 Lycksele is a city and seat of Lycksele Municipality in Västerbotten in northern Sweden.The city has 8513

The city was from the old main center for southern Lapland with two major markets annually. Lycksele is the oldest resident Sami settlement, in 1607, the site was selected for the official church and marketplace in Lapland by Charles IX. The first Swedish Sami school, Skytteanska Skolan, was built here in 1634. Lycksele was the first place in Swedish Lapland, which was designated as a city in 1946, hence the nickname “Lapp Stockholm “.In 1926 came the train to the village, and European Highway 12 runs through the place.

On the outskirts of the town of Lycksele zoo which has about 400 animals from 30 different species Nordic. There is also a forestry museum located at the “old place”, the old market place from the beginning of the 1600s that are worth a visit. Björngrottan located around 10 km to the south, the site offers both lodging and dining, and is a suitable conference venue. They have a special picture game about predators and Saami reindeer.

A unique attraction is the underground church. It is located 90 meters down into the mine kristin berg, and is known for a two-meter high image of Christ on one of the walls. A silhouette of Christ appeared in a up mysteriously in 1946 after an explosion in a part of mine.

Lycksele Airport is 5 km outside the city. Umeå International Airport is 130km from Lycksele.