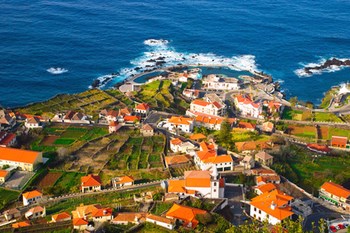 Madeira is a Portuguese archipelago in the Atlantic Ocean, located approximately 600 miles west of Morocco coast.

Madeira has approximately 250,000 inhabitants (2010). Most live on the Madeira, but there are also some people (about 4500) on the second largest island – Porto Santo.

It’s preserved map of Madeira from the 1300s, but the archipelago was then “forgotten” until it was rediscovered by the Portuguese in 1418. Since then it has been Madeira part of Portugal – except for a period during the Napoleonic wars of the early 1800’s, when the archipelago was occupied by the British.

“Capital” Funchal is located on the southern coast of the main island, and has about 112,000 inhabitants. The other cities are relatively small. Funchal is the center of Madeira’s tourism – which today is the archipelago’s main source of income. Tourist focus began in the latter part of the 1800s, then with the upper classes in Europe (especially the UK) was the main target. After 2 World – primarily after airport outside Funchal opened in 1964 – has Madeira evolved further as popular destination also for “normal” tourists.

In the 1400 – and 1500’s were invested heavily in the sugar trade, which paved the way for a considerable improvement in Madeira. In this period it was built several large buildings, including Sé Cathedral in Funchal. In the 1600s, took over the focus on wine production part for sugar cultivation – and it was eventually developed his very own wine tradition in Madeira.   The term “Madeira” originated in the 1700s and is still one of the archipelago’s most associated with.

The main island of Madeira is dominated by mountains, and much of the island is more than 500 m The highest peak is Pico Ruivo, which peaks at 1861 meters above sea level. Between the mountains there are several beautiful valleys and ravines. The coast is dominated by steep cliffs, with the highest – Cabo Girao, just west of Funchal – plunges 580 feet straight into the sea.

The landscape on the second largest island – Porto Santo – is something different. It is the highest point of 520 meters, and the coast is at 9 km of sandy beach.