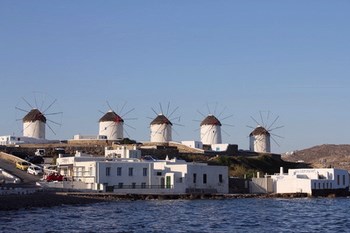 The Greek turistøya Mykonos island in the Cyclades, located in the Aegean Sea. The island has about 6,000 permanent residents – and most of them live in the main city “Khora” – which also goes by the name “Mykonos”.

During the summer, rising population on the island considerably, when tourists come to vacation – with a focus on solar, – beach – and bathing.Mykonos is also known for its vibrant nightlife with a large number of bars and nightclubs.

The landscape of the island consists of low mountains and cut erik coast with numerous coves and beaches. Highest point measures 364 m

The main town of Chora is located on the west coast of the island and is famous for its windmills, churches, its whitewashed houses with blue doors and narrow streets. There is also an archaeological museum, a folklore museum and a maritime museum. The district “Little Venice” in Khora is a major tourist attraction, with its colourful houses standing on stilts in the water.

Mykonos has many wonderful beaches and the west coast is the popular seaside resorts of Agios Stefanos and Agios Ioannis. The latter is known from the movie “Shirley Valentine”.

There is ferry from Mykonos to a number of other Greek islands – including Santorini, Paros and Crete.

The International Airport Mykonos Airport, located 4 km southeast of the center of the main city.