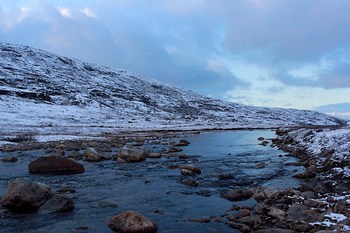 Narvik is a town and municipality located in Ofotfjorden in Nordland county. Home to 14 035 (2012) residents in the city.

The town grew up around the docks for shipment of iron ore from Kiruna in Sweden when a British-Swedish company in the late 1800s began to build Ofotbanen who now carries ore from Kiruna.I first called the city of Victoria Harbour.

Narvik suffered badly during the 2nd World War. Because of iron ore from Sweden Narvik was strategically important to both the Germans and the Allies. 9. april 1940, Narvik was one of the main goals of the German invasion. Curb vessels ” Norway “and” Eidsvold “was sunk and the town occupied by German troops.At the War Memorial Museum in the city can learn more about the dramatic invasion during the war. Another attraction is the Polar Zoo, located 6.5 km outside of Narvik and the world’s northernmost zoo.

Alpin place Fagernesfjellet is beautifully situated at Ofotfjorden. There is a cable car up to the 1,000 meter high mountains all year.

The regional airport Framnes is 2 km from the center. It is 75 km to the Harstad / Narvik Evenes.