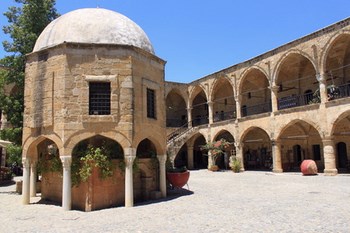 Nicosia is the capital of the island of Cyprus in the Mediterranean, and has approximately 276,000 inhabitants (2012).If it is estimated metropolitan area population rises to 476,000. Nicosia lies approximately in the center of the island on the River Pedios, and is the country’s economic, political and cultural center.

Since 1974 the center of Nicosia divided into a northern Turkish Cypriot and Greek Cypriot southern part.

The city is known for having many mosques that have previously been churches – including Seljmiye mosque located in the northern district and was the Gothic St. Sofia Cathedral from the 1200s.

In the southern Greek Cypriot quarter is “old town” with a Venetian mural from 1568. Here you can also see Faneromeni church from 1872. The area also has an active cultural life and there are also a number of shops, pubs and restaurants.

In the northern Turkish Cypriot town are several museums and a major tourist attraction is Arabahmet mosque from 1872.