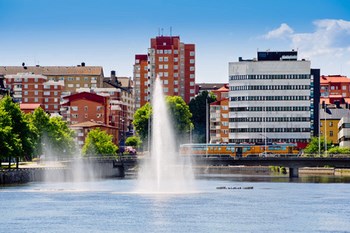 Norrköping is a city located in Östergötland County and Norrköping municipality’s administrative center basically in Bråviken which is an arm of the Baltic Sea. The city has a population of 87,247 inhabitants (2010), and is located 162 km southwest of Stockholm.

Because of a large textile industry, the city has had nicknames such as “Sweden’s Manchester “and even” Peking “.In 1950 there were a total of 54 factories with 6,600 employees in the city. Many of the factories were far river Motala.  The beautiful old industrial buildings (mostly from between 1850 and 1910) are later used for other purposes, including the Museum of Labour is here and the city museum.

The center is concentrated around the Old town square surrounded by buildings from the 1700 – and 1800’s. Norrköping is the perfect city to wander around in, Drottningsgatan is the city’s main street that stretches from Norra promenade and the train station from 1866 to the Art Museum from 1946.

The ruins of the castle Johannisborg from 1613 is another place that is worth visiting. In summer planted 25,000 cacti in Carl Johans Park and form a cactus plantation.

Kolmårdens Djurpark located 30 km north of Norrköping. In addition to the zoo has an aquarium where among other things you can see snakes, crocodiles and sharks.

Norrköping Airport is 3 km from the center of Norrköping.