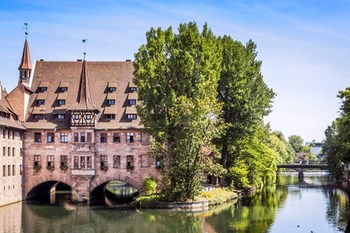 Nuremberg is a city in the German state of Bavaria. It is located at Pegnitz River and the Rhine-Main-Danube Canal ca. 170 km north of Munich.The population is 510,602 (2011) inhabitants.

The cultural flowering of Nuremberg in 1400 – and 1500’s made it to the center of the German Renaissance. For many people, Nuremberg is still associated with its traditional gingerbread (Lebkuchen) pocket, sausages, and handmade toys. Every year before Christmas, held one of the largest and most famous Christmas markets Germany here that draws over a million visitors.The market is known for its handmade ornaments and delicacies.

Nuremberg was an early center of humanism, science, graphics and mechanical inventions. Astronomy has a lot to thank especially the town.   In 1471 there was built an astronomical observatory in Nuremberg and published many important astronomical charts. Most well known is that the main part of Nicolaus Copernicus’s work was published in Nuremberg in 1543.

From November 1945 to October 1946, Nuremberg was the site of the famous Nuremberg Trials. Nuremberg Trials is a term used to refer to trials of leading German Nazis. Among the most famous was convicted is Rudolf Hess and Hermann Goering.