Compare prices and find cheap car hire in Munich from well-known and local car hire companies. Insurances and unlimited mileage are included. Save up to 70% on car rental in Munich through us. 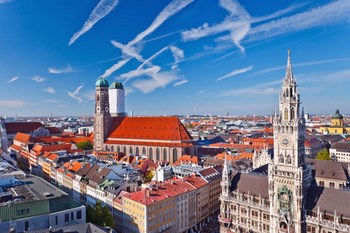 Munich is the capital of the southern German state of Bavaria, and one of Germany’s most influential cities. It is located on the River Isar, and has about 1.3 million inhabitants (2010). Munich is an important transport hub – and also has a varied industry. Traditionally, the city has been known for its beer production and for its rich cultural life. Tourism is today an important business route.

Munich was officially founded in 1158,but had already for a few hundred years been inhabited by monks from the monastery of Tegernsee. During the Middle Ages, Munich consolidated its position as a trading centre, primarily with regard to the turnover of crafts and art products.

Several of Munich’s sights are concentrated around Marienplatz Square. Here you will find, among other things, Neues Rathaus (the new town hall) – built at the end of the 19th century in neo-Gothic style as well as the column Mariensäule. Nearby is also the Altes Rathaus (Old Town Hall) from the Middle Ages, with its beautiful tower. The building now houses a toy museum. 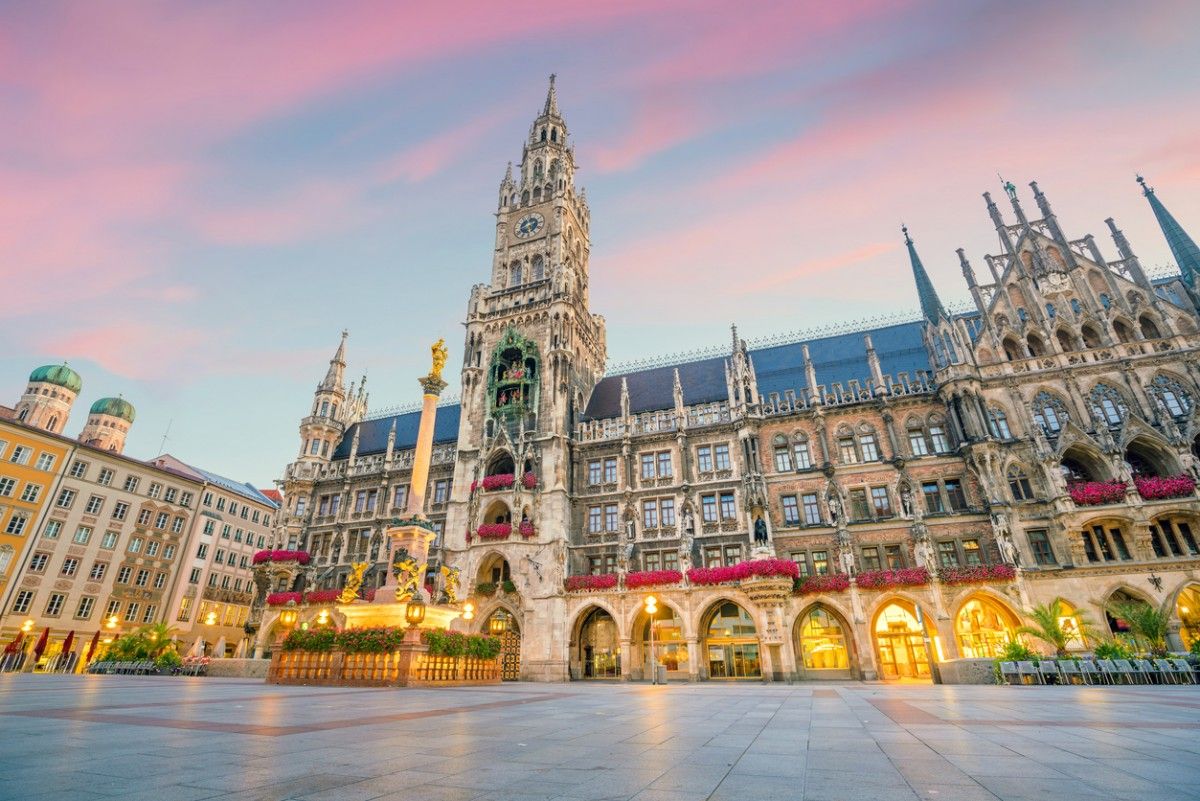 Marienplatz in Munich where several of the city’s sights are concentrated.

Other historical attractions include the former Alt Hof royal castle, where the oldest parts are from the 13th century. Also mentioned in the great Frauenkirche from 1271. The church was built at the end of the 15th century with two 99-metre high towers. Otherwise, the following seeworthy buildings can be mentioned – most from the 17th and 18th centuries: Theatinerkirche and St. Johannes-Nepomuk Kirche – as well as the castles of Residenz and Nymphenburg. There are also a number of 19th-century magnificent buildings in Munich – including Glyptothek, Staatsgalerie and Propylän, all located at Königsplatz.

Of course, the city of Munich also has a number of museums, art galleries, theatres and concert halls to offer – and a number of major cultural events are also held in the city, including the city.. the annual, world-famous “Oktoberfest”.

Many know that one of Germany’s best football teams of all time, FC Bayern Munich, has its home ground here. They play their home games at the new “Allianz Arena” – a giant stadium with seating for 66,000 spectators.

Bavaria is a great area with many beautiful cities, lakes and forests, with the Alps as the backdrop. Car rental makes it easy to reach beautiful villages, castles and other sights worth visiting while you are in Munich. There are also many places in this region that are of historical importance, especially from the Second World War. Here are suggestions for driving routes that are among the most popular. 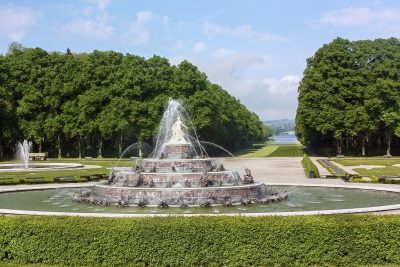 One of the beautiful gardens of the Herrenchiemsee – Germany’s answer to Versailles.

Herrenchiemsee is a complex consisting of two palaces on the island of Herreninsel in Chiemsee, Bavaria’s largest lake (Bodensee is admittedly larger, but it is only partially located in Bavaria). One of the palaces was built by Ludwig II of Bavaria, the same king who also built the famous Schloss Neuschwanstein. It is inspired by Versailles outside Paris, and stands on the ground where there was previously a monastery. Today, Herrenchiemsee is a very popular tourist attraction. Guided tours of the palaces can be explored and experience the extravagant surroundings of Bavaria’s kings. Both the palaces, the old monastery, and the beautiful gardens located on the island are a unique experience. 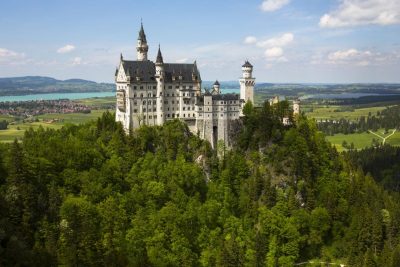 Neuschwanstein Schloss – The most beautiful castle in Germany

You’ve probably seen this castle on film. For example, the castle in the Disney version of Cinderella is inspired by the Neuschwanstein Schloss. This is probably the most famous castle in all of Germany, and many believe it is also the most beautiful. It was built at the end of the 19th century by Ludwig II of Bavaria, and was intended to become his permanent home. However, the poor Ludwig was declared insane, and shortly afterwards he drowned under mysterious circumstances, just before the castle was finished. Today, Neuschwanstein is one of the most popular sights in Bavaria. Remember that a tour must be booked in advanceand you must walk up to the castle from the village below. The tour goes through beautiful landscapes, and takes about 40 minutes. 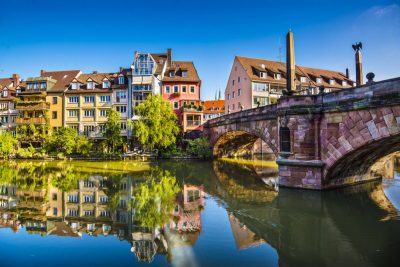 From the old town of Nuremberg – the city that was previously considered one of Germany’s most beautiful.

Before World War II, Nuremberg was considered one of Germany and Bavaria’s most beautiful cities. Most of the city centre, however, was destroyed by the bombing, but fortunately rebuilt after the war. The old town, the palace, the city walls and the bridges look about the same today, as they did when they were built in the Middle Ages. Kaiserburg, which ascends to the Old Town, is the main attraction, but there is more than enough else to look at in this city. If you are interested in the history of war, you have many museums to visit in Nuremberg, including the Palace of Justice where the Nuremberg trials were held.

Dachau – The First Concentration Camp of The Second World War

Dachau is a city just outside Munich, today with about 47,000 inhabitants. The place is best known for its inhuman role during the Second World War. Just outside the picturesque center, the KZ Dachau concentration camp was built in 1933. Tens of thousands of prisoners were executed and tortured, until US forces took over the area on 29 May 1945. Retrieved 10 April 2010. In addition to visiting the camp, which today is a museum and memorial site, you should catch up with the center of the city. There you will find, among other things, Schloss Dachau,and many beautiful buildings of historical interest.

Outside the picturesque center of Dachau, the World War II concentration camp is located. 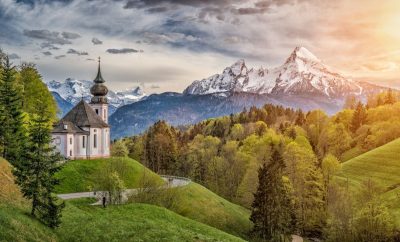 Berchtesgaden – a visit you will never forget.

Like many other places in southern Germany, Berchtesgaden has a dark history from World War II. The beautiful village is located at the foot of Mount Kehlstein, where the Nazis built the Kehlsteinhaus in 1938. The building that the top leaders of the Nazi Party had as a meeting place is located on one of the mountain’s peaks, and is most famously under the name “Eagle’s Nest”. The village of Berchtesgaden is a gem, with beautiful houses and cozy streets, and with lake Königssee close by. A visit here is hardly something you’ll regret. At the same time, head up to the historic building at the top above the village, both for historical reasons, and to catch up with the incredible views of Obersalzberg. Also consider a trip to Salzburg in the same slap, since you still pass on the outskirts of the city when you come from Munich. 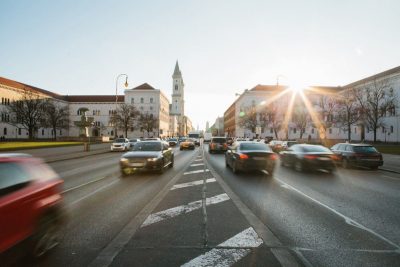 It is relatively easy to drive in Munich.

It is relatively easy to find parking space, also in the streets, when you are in Munich. Please note that seats marked with green stripes are reserved for the inhabitants of the city and require the car to be registered in an accompanying database. Everyone else should park in blue-marked seats. During the day, you will have to pay a fee for the vending machines standing along the streets, and the price will vary depending on the location of the central car park. Prices are not particularly high compared to what one pays in many other European cities. There is also plenty of parking garage in the city center. These you will normally find easily with the navigation of the rental car, or with smartphone with navigation.

Getting around with a rental car inside the centre of Munich is relatively easy, but the best thing is to use navigation if you’re not familiar. In some areas, the streets are narrow, and there are many one-way streets here. However, traffic can be quite dense at times. When you’re going in and out of town, it’s a lot easier. The motorways in Germany are usually very good, and drivers drive considerately, although many are at high speed.

The German name of the international airport in Munich is Flughafen München. This is the second busiest airport in Germany, only bypassed by Flughafen Frankfurt am Main. The total number of passengers annually is over 48 million people. Flughafen München has two main terminals. Terminal 1 is the oldest, and mostly handles low-cost airlines, and airlines that do not belong to the Star Alliance. Terminal 2 handles all flights to Lufthansa, and most aircraft affiliated with star alliance. However, the terminal is housed in two different buildings, with air parking between each other.

The car hire companies are located in a separate center in the middle of the airport, and outside the terminals. This is right next to the parking garage where the cars will be collected and delivered. The delivery of car rental is by the way very easy at the airport in Munich. All companies use the same service center for this. As of today Sixt, Avis, Budget, Europcar, Alamo, Enterprise, National and Flizzr represented at the airport in Munich.

The airport in Munich at night.