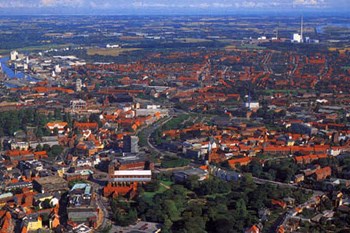 Odense is Denmark 3 largest city (after Copenhagen and Aarhus), located on the island of Funen in Region of Southern Denmark. Odense has 168,000 inhabitants (2011), and is Fyns major industrial, commercial, and service city.

The city is located on both sides of the river “Odense Å” – about 3 miles south of Odense Fjord. Odense is one of the oldest cities and has been mentioned already in the year 988 The historic city center is well preserved medieval, with narrow and winding streets and a number of old timber.

Odense is perhaps best known for being the writer Hans Christian Andersen’s home town, and a major tourist attraction is his childhood home which is now the museum.

Other popular attractions in the city include St. Knud’s Church and St. Hans Church – both from the 1200s, Our Lady Church from the late 1100’s, Main Street “Vestergade” which is the city’s main shopping areas, open-air museum “The Funen Village” in Hunderup Skov, Denmark Railway Museum, Museum for photographic art, Denmark s graphical museum and Danish Media Museum.

Odense also has theatre, opera and concert halls, zoological garden as well as a number of art galleries.

Odense Airport is located 10 miles northwest of downtown, and has largely charter wings.