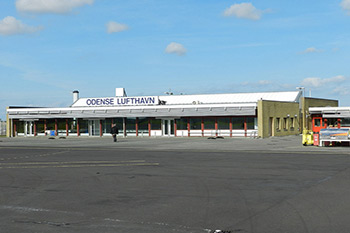 Odense Airport (ODE) is located 10 km northwest of Odense city center – the town Beldringe.The airport has not had domestic flights since 1998, and currently only charter aircraft wings.

Airlines Cimber Sterling, Iberworld, Malmö Aviation and Thomas Cook Airlines Scandinavia fly to popular holiday destinations such as Italy, Majorca, Croatia, Turkey and Bulgaria – as well as to several of the Greek islands.

Odense Airport is small and straightforward with one terminal, and the airport has only one restaurant / café. There is free parking outside the building.

Most common means of transport between Odense Airport and downtown is taxi. It is also possible to rent a car in Odense – either at the airport (where the car rental company Europcar’s office) or in the center.