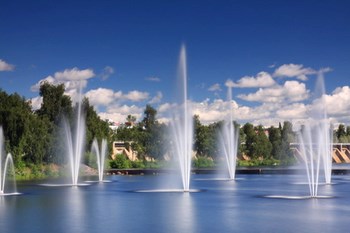 Oulu is a city and municipality in the region of Northern Ostrobothnia in Finland is located Oulujokis outlet in the Gulf of Bothnia. Oulu has a population of 145,256 inhabitants (2012), and is the fifth largest city in Finland and the largest in Northern Finland.

Oulu was founded as a town in 1605 by Charles IX of Sweden and has for centuries been a major trading center.Because of the tar trade in 1700 – and 1800-century the city voted to become an important port and skipsverftsby. After a fire in 1822, the city was rebuilt in a grid pattern. The center is concentrated around the market place where there is a market hall and events year round and Rotuaari area where you will find shops and cozy cafes.

Top industries in Oulu, paper, fertilizers, leather, and furniture and sawmill. The city also has a large IT industry.

There are many artists, writers and musicians resident in town that has a rich art and culture, including its own symphony. Throughout the year there are many concerts, both rock, classical music and jazz, as well as other cultural events and festivals. In November, held the International Children’s Film Festival.