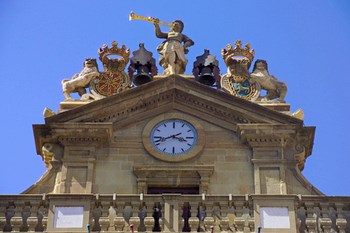 Pamplona is the capital of the northern Spanish region of Navarra.The city has about 200,000 inhabitants (2010), and is located approximately 82 km southeast of the port city San Sebastián.

According to tradition, Pamplona be founded by the Roman emperor Pompey around the year 75 BCKr. under the name Pompaelo. In 700 AD, the city was conquered by the Arabs, and at the end of the same century by Charlemagne. Throughout much of the Middle Ages Pamplona capital of the kingdom of Navarre.

The rest has done Pamplona famous – and which is also the main attraction – the annual San Fermin festival (“Fiesta de San Fermín”). It takes place during the period 6 – 14 July. It’s basically a bullfight, but prior to the events inside the bullring carried the so-called bull run through Pamplona’s narrow streets. It has been regarded as particularly heroic – at the risk of life and limb – to run ahead of the bulls. Several have been killed in this “exercise” over the years – even more badly damaged.

San Fermin festival immortalized in Ernest Hemingway’s famous novel, And the sun runs its course, which came out in 1926.Hemingway was present many times during this festival.

Since the San Fermin festival had (and still has) such a dominant position in terms of Pamplona’s reputation, one can easily forget that the city has other things to offer – including some interesting architecture. The main attractions are the beautiful late Gothic cathedral from the 1700s, a citadel from the 1400s and the remains of the thick medieval city walls.