Compare prices and find cheap car hire in Paris from well-known and local car hire companies. Insurances and unlimited mileage are included. Save up to 70% on car rental in Paris through us. 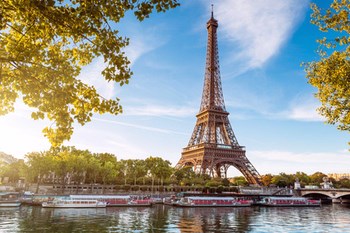 Paris, France’s capital, is just below where the River Marne flows into the Seine, and the latter divides the city in two: the Right Bank and the Left Bank. The city itself, Ville de Paris, has a population of about 100,000. 2.2 million (2010), while the larger metropolitan region of Paris has a total population of between 11 and 12 million. The ville de Paris is administratively divided into 20 so-called “arrondissements”.

Paris is regarded by many as Europe’s capitalof culture and fashion – and it can offer countless sights. Some of the most famous and popular bee-actions are the Gothic Cathedral of Notre-Dame, located on the island of Ile de la Cité in the heart of the Seine River. It was begun before the year 1200 and is one of the world’s most famous church buildings. From the tower (387 steps) there are nice views of central parts of Paris. Other famous churches in Paris include the White Basilica of Sacre Coeur, located on montmartre hill from the late 19th century and the very beautiful St. Sulpice Church from 1754, located in the St. Germain area.

Paris’ most famous landmark is the Eiffel Tower, built in 1889 to the centenary of the French Revolution. The tower is 324 m high (incl. the antenna at the top), and was in its time the world’s tallest building. There is a lift up to the top, and from there you have a fantastic panoramic view. About as famous is the Arc de Triomphe with the tomb of the unknown soldier, located on place de l’Etoile (Star Square), at one end of the Champs Elyséesparade street. At the other end of the street is place de la Concorde, where there is an over 3,000-year-old Egyptian obelisk. Adjacent to Place de la Concorde are the beautiful Tuileries gardens. 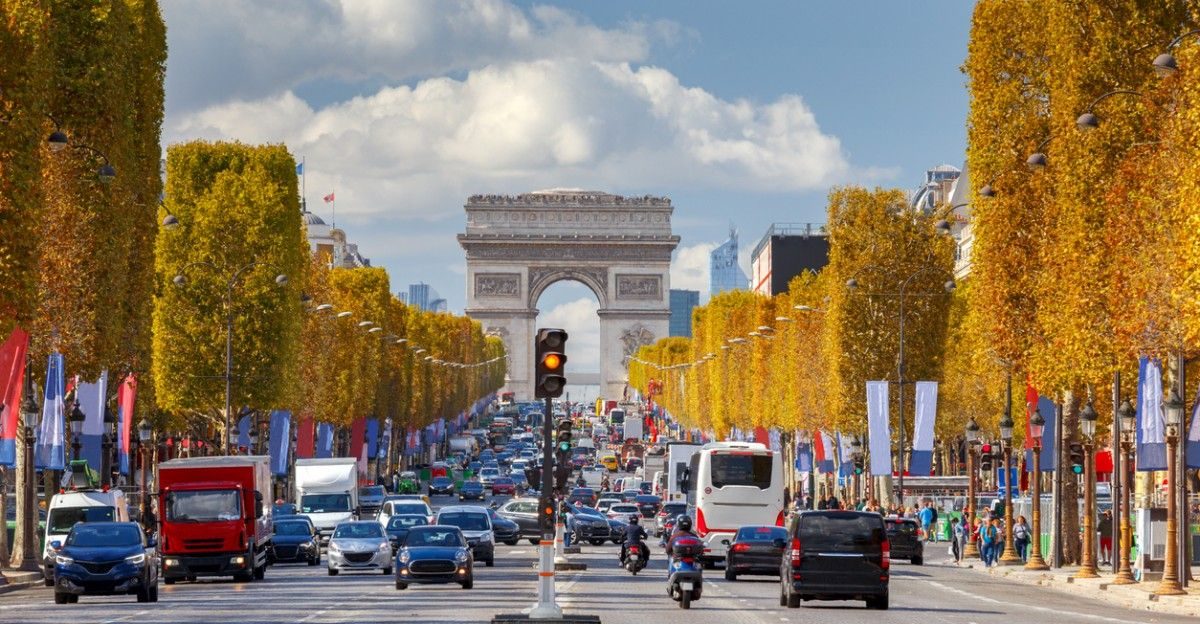 Traffic in Paris with the Champs Elysees in the background.

At the park we also find France’s most popular art museum, the Louvre, where all the greats from the history of visual art are represented – among others. Leonardo da Vinci with the painting “Mona Lisa”. In a metropolis like Paris, there are of course also a number of other museums (including the modern Pompidou Centre), as well as opera, theatres, concert halls and other cultural institutions. 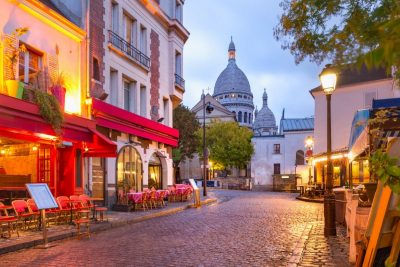 A visit to one of the many restaurants and cafés in Paris is a matter of course.

When it comes to architecture, several of the bridges across the Seine are also worth seeing. This is especially true of the oldest of them, Pont Neuf – which was built already around the year 1600.

Otherwise, Paris is famous for its rich restaurant offering. A visit to some of the charming outdoor cafes in the picturesque Latin Quarter on the left bank is a must for any Paris tourist.

Paris is a great starting point if you want to experience northern France. After you’ve taken on the likes of the Eiffel Tower and the Louvre, it’s a short distance by car rental to a number of great places where you’ll get completely different impressions and experiences. There are many small and beautiful towns in the region, and perhaps especially if you are heading north towards the English Channel. here are some suggestions for day trips that are easy to implement by car.

Versailles is among the most famous castles in the world, but started its history as a small hunting lodge that the royals took advantage of. Eventually a small castle was built where the cottage stood, before Louis XIII decided to make serious of it all. Eventually, the Château de Versailles became the residence of the French kings, including Louis XIV (The Sun King), until the French Revolution in 1830. Since then, Versailles has been used in official contexts,and as a museum. The palace and the beautiful gardens around are considered one of the most important sights in France, and you will learn a lot about French history when you stop by. 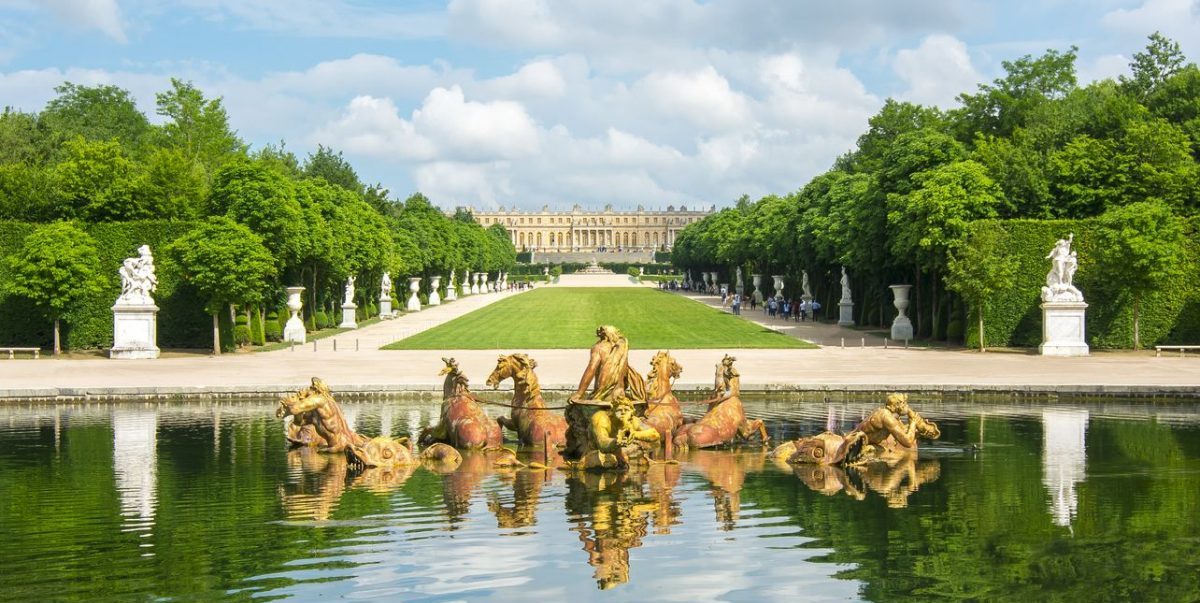 The palace and the beautiful gardens around are considered one of the most important sights in France, and you will learn a lot about French history when you stop by. 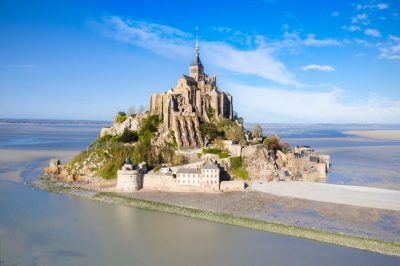 The islet of Mont Saint-Michel was used as a fortress in roman times.

Mont Saint-Michel you’ve probably seen a picture or movie of before. This is a rocky islet that looks like a small mountain protruding from the sea. Holmen has a long history, and was used as a fortress in roman times,before a monastery was built at the top sometime in the 8th century. Around the monastery there are pleasant little houses along cobbled streets, stretching up to the top of the islet. During the French Revolution, Mont Saint-Michel was converted into a prison. Holmen was later declared a national monument. Today there is a thousand-metre bridge over to the beautiful little islet, and you can park your rental car right at the foot of Mont Saint-Michel. 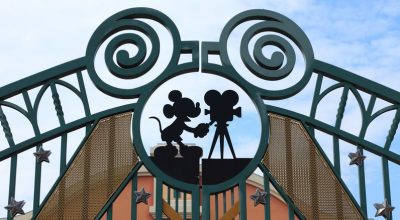 Walt Disney Studio Park is suitable for both big and small!

Whether you’re in France’s capital on a family trip (or just have a playful mind), consider taking a trip with your rental car to Disneyland Paris and Walt Disney Studios Park. This is the theme park formerly called Euro Disney, which today is two merged parks. Here there are no sun kings that rule, but instead Mickey Mouse and Donald Duck. The resort is located on the outskirts of Paris, about just east of the city center, just off the town of Chessy. In total, more than 320 million people have visited, making Disneyland Paris Europe’s largest theme park.

Amiens – The city of floating gardens

Amiens is located a short drive north of Paris, in the Picardie region. The city is one of the most beautiful in the country, and it is especially known for its impressive Gothic-style cathedral. It is also known for its canals, where residents put out so-called “hortillons”, that is, floating gardens with beautiful flower beds. If you stop by, treat yourself to a rowing boat ride on the canals,while enjoying the atmosphere, flower gardens and picturesque medieval houses. In the area around Amiens there are a number of other sights, such as famous Battlefields from the First World War,memorials and museums that are also worth a visit. 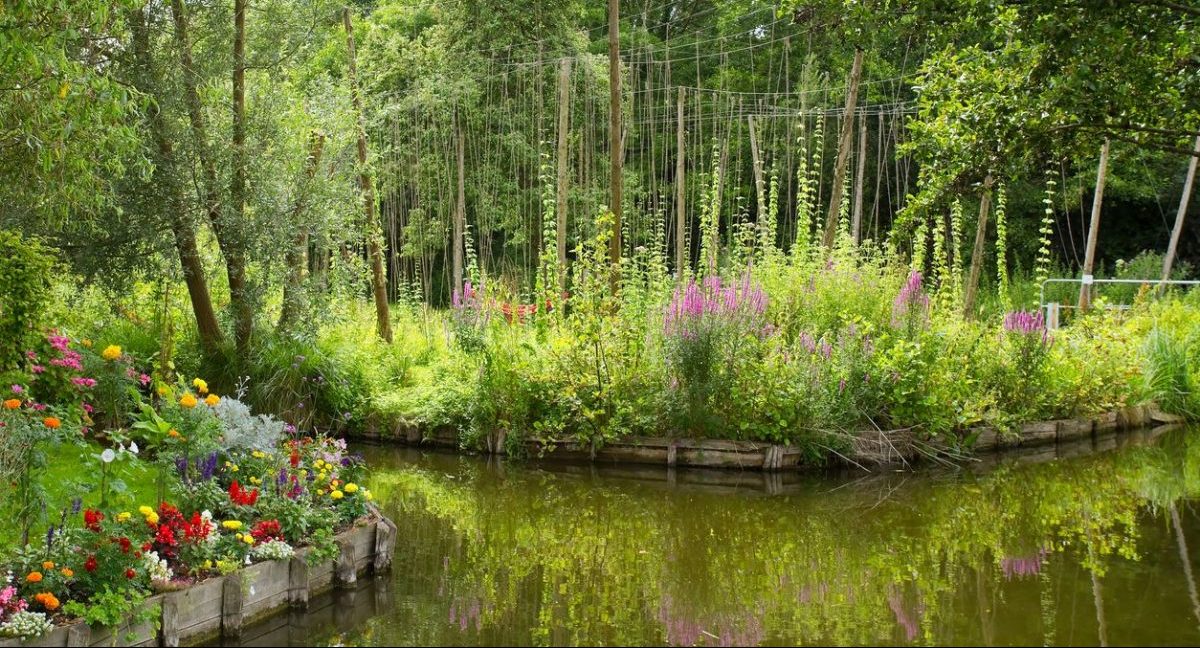 In Amiens you can experience floating gardens with flower beds in the city’s many canals. 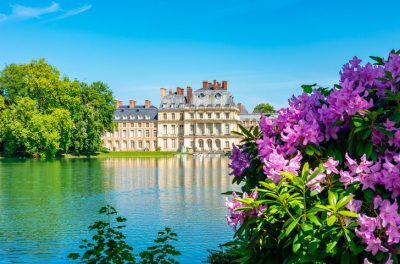 This beautiful castle is located inside the great Fontainebleau Forest,just south of Paris. The area has many picturesque neighbourhoods and villages where rich Parisians have their homes, and Fontainebleau is a popular destination on weekends. The castle is one of the largest in France. The first version was built already in the 1130s,but has changed and expanded many times over the years. Several of the country’s heads of state used the Château de Fontainebleau as their residence, including Louis VII and France’s first President Napoleon III (the nephew of the commander Napoleon I). The castle has been used as a museum since 1927and is undoubtedly one of the most impressive in France. By the way, INSEAD is located in Fontainebleau, Europe’s perhaps most prestigious business school. 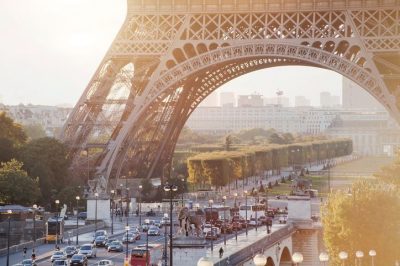 Traffic in Paris can be very close during the day.

In Paris, you normally have to pay to park on marked spaces in the streets between 21:00 and 08:00. The city is divided into two zones, where the price is high in the zone that encompasses the city center. There are some free parking spaces here and there, but these are usually limited to two hours. On Sundays and national days, street parking is free, and the parkrooms will show this.

The best options for those who have to park car rental are to use one of the many parking facilities you will find in the city center. The facilities located slightly outside the city centre are significantly more affordable. A good tip is to find a garage that is near a metro station.

It is generally not easy to drive in Paris. Traffic can be very close during the day, and especially during rush hour. In recent years, many streets have also been blocked from traffic– to reduce pollution, and to make the city more pedestrian-friendly. Most people who visit paris by car rental choose to leave the car parked in the hotel or in a garage. When you’re going around to experience the city, it’s usually best to use the subway.

When you fly to Paris you normally land at either the largest airport that is Paris Charles de Gaulle International Airport,or Orly International Airport. Some low-cost airlines and charter flights also land at the much smaller airport Beauvais Airport, including some of the flights to Ryanair and Wizz Air.

Charles de Gaulle Airport is also called Roissy Airport, although this has become less common over the years. It is France’s largest, and ranks second largest in the number of passengers in Europe. Almost 80 million passengers a year are served here.

Most major international car hire companies are represented at Charles de Gaulle, including Avis, Hertz, Budget, Enterprise, Sixt, Europcar, Alamo and National. However, their counters are not assembled, but most can be found in Terminal 1 and/or in Terminal 2. In Terminal 2, most companies will have counters in several locations. 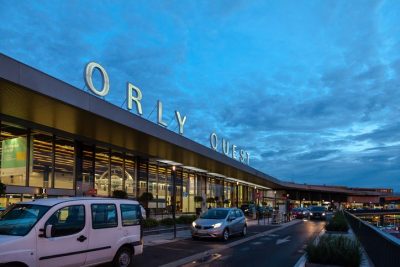 Although Orly is significantly smaller than Charles de Gaulle, this is also a major airport on a European scale. It ranks second largest in France– with about 33 million passengers a year. The airport takes care of much of the domestic traffic in France, but also international and intercontinental flights. 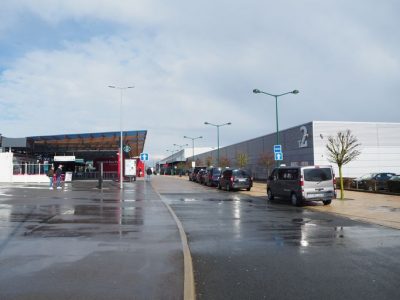 Beauvais Airport is located a short distance north of Paris. The airport has about 4 million passengers a year, preferably those flying with low-cost airlines. There are two relatively small terminals here, numbered 1 and 2.

The car hire companies located at Beauvais Airport are located in a separate centre next to terminals 1 and 2. As of today you can rent a car from Avis, Budget, Hertz, Firefly, Europcar, Thrifty and Sixt at this airport.